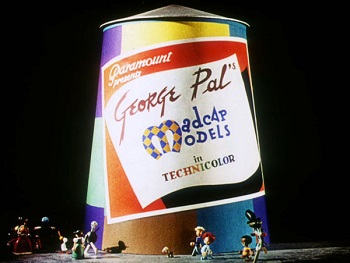 George Pal's Puppetoons (also released under the name of Madcap Models) was a series of Stop Motion puppet films, made from 1932 to 1947, with several recurring uses of the name in George Pal's later feature film work. The series was initially made in Europe during the 1930's, but Pal moved to the US in the 1940's (just two months before his native Holland was ravaged by the Nazi regime) and got a contract with Paramount to produce Puppetoons there.

The films are notable not only for their Art Deco aesthetic, but for their dynamic use of stop motion; mostly eschewing articulated limbs used in films like King Kong (1933), Pal developed his own unique method; each individual movement or expression of a puppet, be it a walk, pose or expression change, required either a new part or an entirely new puppet to be made altogether for the film. As such, a single Puppetoon required thousands of custom made models for each scene. But as a benefit to the expensive, time consuming process, the Puppetoons achieved a cartoon like motion that would have been difficult or flat out impossible to achieve with standard stop motion effects, such as broad Squash and Stretch effects, and this allows the characters to move very expressively and with vigor and vitality, and in very creative ways to boot.

The initial batch of Puppetoons were very experimental fantasy pieces, centered around pop culture of the day or charming fantasy stories, and often featured advertisements for products of the time (such as Horlick's Malted Milk or a Philips Radio) but when Pal moved to the US, the pressure to make the Puppetoons more commercial prompted him to work with more recurring characters (and thus allowing the films to be made somewhat faster and cheaper), such as the recurring African American child named Jasper.

The series concluded on a literal high note with an adaptation of the children's record Tubby The Tuba. George Pal went on to work as a producer and director in live action films, directing among other works the iconic 1960 adaptation of The Time Machine. The Puppetoon process would find work in other films, such as Pal's "The Great Rupert" (1949), "Tom Thumb" (1958) and "The Wonderful World of the Brothers Grimm" (1963).

The series got back into the limelight again with the release of Arnold Lebovit's The Puppetoon Movie, a compilation feature with a framing device guest-starring Gumby, in 1987. This has been released on VHS, DVD and a very limited Blu-Ray release in 2014 (the latter including several never-before-released shorts as extras). As of 2020, a sequel The Puppetoon Movie 2 became available on DVD with plans for a third film.

Suffice it to say, the series laid the groundwork for Pal's later film work (such as the esteemed 1953 adaptation of The War of the Worlds), and provided inspiration for many future greats in the field of stop motion animation.

The series is also notable for adapting two of Dr. Seuss' early stories into stop motion (albeit without emulating his trademark art style); "The 500 Hats of Bartholomew Cubbins" (1943) as well as "And to Think That I Saw It on Mulberry Street" (1944). Several shorts in the franchise have received Academy Award nominations, including "Rhythm in the Ranks" (1941), the anti-Nazi war allegory "Tulips Shall Grow" (1942), "Jasper and the Beanstalk" (1945), "John Henry and the Inky-Poo" (1946) and "Tubby the Tuba" (1947).

Puppetoons with their own work pages:

Tropes from other shorts in this series include: