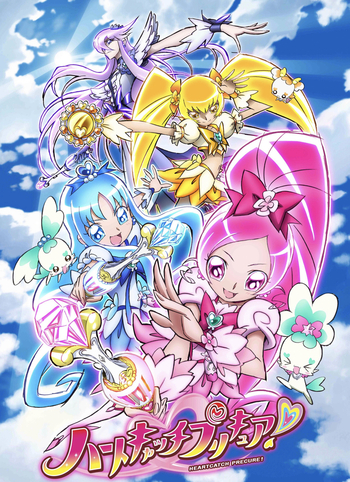 The seventh entry in the Pretty Cure series, and the first since Futari wa Pretty Cure Splash★Star to use a pair of Cures as the main characters. It also features the distinctive character designs of Yoshihiko Umakoshi, who previously served as character designer for Izumi Todo's other notable series Ojamajo Doremi.

When Innocent Flower Girl Tsubomi Hanasaki and her parents move to a new town, Tsubomi has her heart set on starting with a clean slate and changing her quiet personality to become more outgoing. Fashion-loving Genki Girl Erika Kurumi immediately attaches herself to her, and no matter how hard Tsubomi tries she just can't pry her off.

Meanwhile, Tsubomi is having a strange dream where she witnesses the last stand of a mysterious woman in white called Cure Moonlight against the sinister Dark Pretty Cure. With the last of her strength, Cure Moonlight implores two fairies — Chypre and Coffret — to search for her successor.

It turns out that Tsubomi is a perfect candidate to take up the Pretty Cure power as Cure Blossom... perfect in every area except actual competence, giving her the title of The Weakest Pretty Cure Ever. However, driven by her desire to change and protect those around her, Tsubomi slowly begins to improve herself.

Soon Erika gets into the act as Cure Marine, and together they fight against the Desert Apostles, who seek to turn the world into a desert by killing the Tree of Hearts. To speed the process along, the Apostles can steal the Heart Flowers of those going through a rough patch and turn them into Desertrians, berserker monsters who are the embodiment of that person's frustrations and insecurities. Fortunately, it's nothing that a bit of punch-based therapy can't handle.

Later on, Bifauxnen Student Council President Itsuki Myoudouin joins as Third Ranger Cure Sunshine to form a team of three. Then there's Yuri Tsukikage, the former Cure Moonlight who has yet to recover from her traumatic defeat at the hands of Dark Pretty Cure.

Erika attempts to use her Marine Tact to clean her room and later to massage her face, much to her fairy partner's exasperation.

Erika attempts to use her Marine Tact to clean her room and later to massage her face, much to her fairy partner's exasperation.