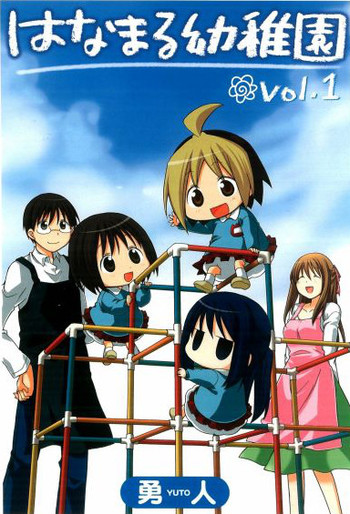 Tsuchida, a recent graduate, is starting his first job as a kindergarten teacher at Hanamaru Kindergarten. On his way to school, he runs into a little girl named Anzu who thinks that Tsuchida is hitting on her. While this is not the case, it's only later he finds out that Anzu is the daughter of Sakura, a girl he knew in high school. Anzu is taking the flirting thing very seriously, saying that she intends to become Tsuchida's wife. Her mother is completely fine with the idea.

The series focuses on the day to day adventures of Anzu and her friends, Hiiragi and Koume, as well as the rest of the class and teachers at Hanamaru Kindergarten.

The original manga by Yuto ran in Young Gangan from 2006 to 2011. An anime adaptation was produced by Studio Gainax and directed by Seiji Mizushima, the series aired on TV Tokyo in the winter 2009/2010 season.

Tropes in Hanamaru Kindergarten include: