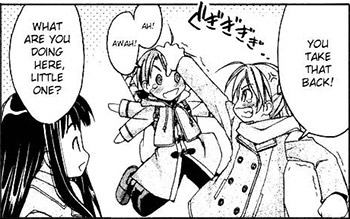 The main character runs into someone out of the blue. The next day, (usually at school or work) they think of how they'll never see this person again, when the teacher announces they have a new student... guess who? Whenever a work takes the time to show someone "accidentally" bumping into a random character, you just know they're not random... and the "reveal" is usually only five minutes away, anyways. Sometimes it's done so that the main characters can have a different first impression of each other than the rest of the cast, who simply go by a "oh, it's just a new student" attitude. In a Love Dodecahedron it can often be used to establish the Official Couple from the beginning.

Used most often in romance stories, but it doesn't have to be a love interest.

Compare with Meet Cute, a related trope where a (future) couple meet in an unusual way and will obviously fall for each other in the future; Forgotten First Meeting, in which two people meet and forget it, and Chekhov's Gunman, a character who is introduced but only gradually revealed (or re-introduced) to be important to the plot much later. Also see Early-Bird Cameo. Supertrope of Introduction by Hookup, when the previous meeting consists of the characters sleeping together.