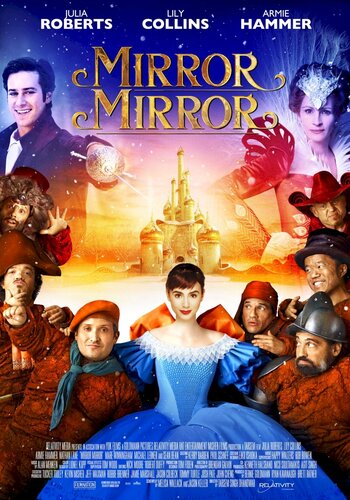 "Once upon a time, in a kingdom far, far away, a baby girl was born. Her skin was pure as snow, her hair was dark as night. They called her... Snow White. Probably because that's the most pretentious name they could come up with."
Advertisement:

A retelling of the "Snow White" fairy tale, directed by Tarsem Singh and starring Lily Collins (daughter of Phil Collins) as Snow White, Julia Roberts as the evil Queen, Armie Hammer as Prince Alcott and Sean Bean as a Walking Spoiler. It was released in 2012, the same year as another Snow White retelling, Snow White and the Huntsman. Whereas that film recasts the story as a dark action-adventure, this is a lighter telling.

Retitled Mirror Mirror: The Untold Adventures of Snow White in some regions.

DO NOT confuse this movie with the novel by Gregory Maguire (of Wicked fame), the Australian TV series, or the 1990 horror movie of the same name. Or that episode of Star Trek: The Original Series that introduced the Mirror Universe.