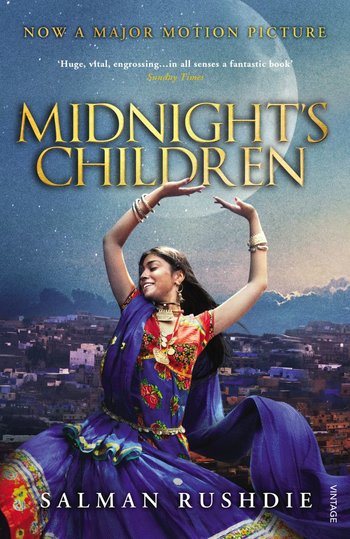 "We will watch your life closely; it will be, in a sense, the mirror of our own."
— Jawaharlal Nehru, in a letter to Saleem Sinai
Advertisement:

Midnight's Children is a 1981 novel by Salman Rushdie, and is one of the two works for which he is best known (the other being The Satanic Verses, which is largely well-known for being the one that got him some very serious death threats). As well as winning the Booker Prize in the year it was released, it has twice won the Booker of Bookers, meaning that it was voted the best novel ever to have won. It is considered a major work in the Magical Realism genre, as well as of postcolonial literature and, of course, of Indian literature; Rushdie's prose style is quite a departure from previous Indian twentieth-century literature, often becoming very vernacular and creating a very vivid sense of the culture and atmosphere of India.

The novel is structured as the hastily-written and occasionally verging-on-incoherent autobiography of Saleem Sinai, born note sort of into a wealthy Indian Muslim family at precisely midnight on 15th August 1947note the exact point in time at which India became independent from The British Empire. This results in Saleem and 1,000 other children born between midnight and one a.m. developing odd supernatural powers, with those born closest to midnight being the most powerful. The two children born at midnight exactly have the strongest powers of all: Saleem, whose telepathy manifests at the age of nine and allows him initially to read everyone's thoughts and later to telepathically connect the five hundred and eighty-one surviving midnight's children; and Shiva, whose powers are never described in great detail but whose name - the destroyer - he lives up to.

Saleem has an incredibly strange and convoluted life, but this is not, in many ways, a novel about Saleem; nor is it a novel about cool supernatural abilities. First and foremost, it is a book about India.

Tropes appearing in Midnight's Children include: