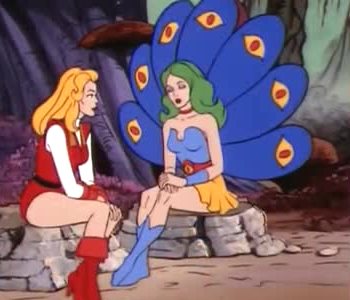 She's not asking anyone out. It's just to look pretty.
Advertisement:

This is common on girls in fiction, despite the peacock flared train being a feature of male peafowl in Real Lifenote females, called peahens, can flare out their tail feathers, but it's not for mating, and it's nowhere nearly as grand as the males. In some cases, peahens may stop laying eggs and develop male plumage, but this is fairly uncommon., but such a thing on a human guy isn't entirely unheard of. This may sometimes make a guy appear like The Dandy, Camp Gay, or Camp Straight, but not always.

Note these do not require the feathers to be peacock feathers, only that they be arranged in a fantail. Futhermore simply wearing peacock feathers is not an example, as that's The Same, but More Specific of Fluffy Fashion Feathers.

A Sub-Trope of either Little Bit Beastly or Fluffy Fashion Feathers (depending on whether this character actually has a tail or is just wearing one).

Not to be confused with women who work for NBC, or with Agent Peacock.

Mayura uses the power of the Peacock Miraculous to create monsters from the emotions of others.

Mayura uses the power of the Peacock Miraculous to create monsters from the emotions of others.