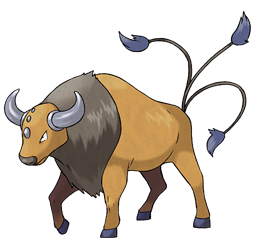 Normally in nature no creature has more than one tail. Not so in fiction.

Any creature at all can have more than one tail, often to establish its other-worldliness. Sometimes the tails look like they might come from different creatures entirely. Usually such a creature is some form of supernatural or semi-divine spirit being, elemental, Kaiju, or demon.

The tail might split partway along into two or more tips, or there might be more than one complete tail springing directly from the base of the spine.

Compare Asian Fox-Spirit and Bakeneko and Nekomata, most instances of which will fall under this trope. Doesn't have anything to do with Twin Tails. Compare and contrast Multiple Head Case for the other end of the animal.