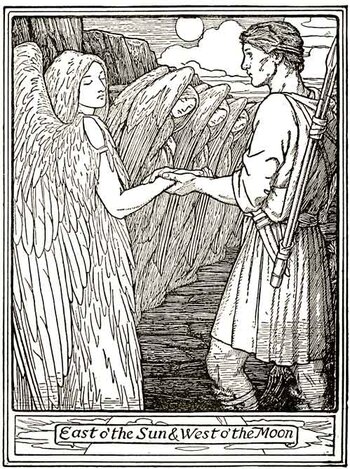 "The Swan Maiden" is a very widespread folktale common to mainland Europe, Russia and even Eastern Asia. Sometimes it overlaps with Aarne-Thompson 400 "The Quest for the Lost Wife".

The tale broadly goes like this: the swan maidens (occasionally men too) are creatures who shapeshift from human form to -usually- swan form thanks to a bird skin or some sort of feathered dress. Often a man happens upon several maidens bathing in a lake or pool, and after spying on them, he steals one dress -which prevents the maiden from leaving, or somehow renders her helpless- and forces her to marry him.

Sometimes, the husband must find his missing wife or undo a curse which she has been placed under.

The Brothers Grimm collected a German version (""The Drummer"

), and Joseph Jacobs made his own version based on several European tales ("The Swan Maidens": here

), but the myth is very widespread. Some different versions can be found in the next links: here

The myth has influenced many stories, modern and old including the ballet Swan Lake, Swanmays in Three Hearts and Three Lions and Dungeons & Dragons, Anita Blake's Swan Men, etc.