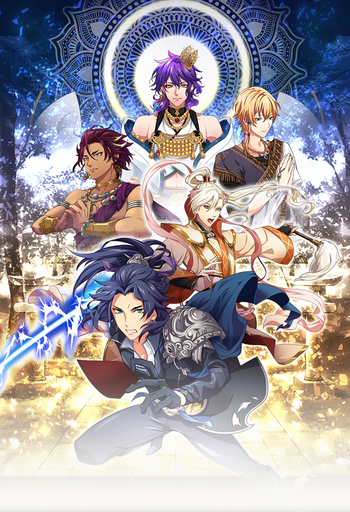 Oh my Buddhas.
All that lives and breathes suffers from birth, age, disease and death.
There is but one way to salvation… enlightenment.
Advertisement:

The modern world as we know it seems normal and filled with people going about their lives, but deep in the dark recesses of the Sixth Heaven, the evil demon lord Māra gathers an army of materialized destructive emotions (bonnō 煩悩, "kleśas") to wreck havoc on mankind and drag them down into endless torment as part of his revenge plot after his defeat against Shaka Nyorai/Shakyamuni. With humanity on the brink of disaster unseen to the mortal eye, it is up to Buddhas to work their divine power in battle to stop them and save mankind… with you as their commander. Oh wait, where have we heard this before…

Namu Amida Butsu! -UTENA- was the 2019 reboot by DMM Games of a little-known defunct 2016 online game entitled Namu Amida Butsu! developed by Visualworks, in which the player assumed the role of the dōmori (堂守, roughly "guardian") of fictitious Bonnō Temple (梵納寺) who summoned, trained and sent good-looking Buddhas into battle against kleśas and unlocked stories as the game progressed. Not related to Revolutionary Girl Utena.

The game has received an anime adaptation produced by DMM pictures and Asahi Production and aired on April 2019, making it part of the Spring 2019 anime season. -UTENA-'s service was terminated on August 31, 2020.

Compare Kamigami no Asobi (a human Player Character with a religious background is left in charge of an ensemble of Physical Gods in order to protect the world). For the anime adaptation, compare Touken Ranbu - Hanamaru.

Tropes listed here are about the -UTENA- game by default, and tropes related to the 2016 game should be noted as such.

The game(s) and its adaptations provide examples of: