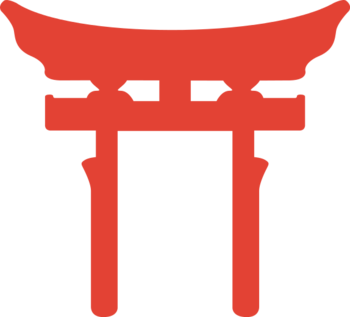 [Joseph Campbell] was in Japan for a conference on religion, and he overheard another American delegate, a social philosopher from New York, say to a Shinto priest, "We've been now to a great many ceremonies and have seen quite a few of your shrines. But I don't get your ideology. I don't get your theology."
The Japanese paused as though in deep thought, and then slowly shook his head. "I think we don't have ideology," he said. "We don't have theology. We dance."
— Bill Moyers
Advertisement:

Shintō (神道note Literally divine path) or Shintoism, was the original religion of Japan and the Japanese people before Buddhism came along. Essentially, it's a set of practices, to be carried out diligently, to establish a connection between present day Japan and its ancient past. Shinto today is a term that applies to public shrines suited to various purposes such as war memorials, harvest festivals, romance, and historical monuments, as well as various sectarian organizations. It's notable for being rather light on philosophizing and heavy on community spirits. In short, Shintoism is less a religion and more of a celebration of Japanese identity, especially in the present day.

According to the Creation Story, the gods Izanagi-no-Mikoto and Izanami-no-Mikoto were tasked with creating Japan by the first gods, Kunitokotachi and Amenominakanushi. Using the sacred jeweled spear Ame-no-Nuboko, they created Onogoro Island, and made their home there. When they wished to be married, they build a palace with a pillar in the middle, and walked around the pillar in opposite directions. When they met, Izanami spoke first, and gave birth to Hiruko, the deformed leech-god of fishermen. They walked around the pillar again, and this time Izanagi spoke first, and Izanami gave birth to the islands of Japan, among many other gods. Tragedy struck when Izanami gave birth to Kagutsuchi and was burnt to death in the process. Izanagi sliced Kagutsuchi to pieces, and the pieces became dozens of lesser deities. He travelled to Yomi, the underworld, to retrieve his wife, but saw she had become a rotted corpse and fled in terror. Izanami, enraged, swore to kill a thousand humans, and Izanagi vowed to create 1,500 to take their place. To cleanse himself, Izanagi washed his face, and from his left eye, right eye, and nose, respectively, the sun goddess Amaterasu, moon god Tsukuyomi, and storm god Susanoo were born.

Amaterasu became The High Queen of the gods and the ancestor of the emperors of Japan, but had issues with her brother Susanoo. To escape his rages, she once hid herself away in a cave, forcing the other gods to coax her out to prevent The Night That Never Ends. When Susanoo raped her attendants and violated her temples, Amaterasu cast him out of the heavens. Susanoo became The Atoner, wandering Japan until he came across a family of minor earth deities plagued by the Yamata no Orochi, a dragon with eight heads and eight tails, to which they had fed seven of their eight daughters. Susanoo fell in love with the last daughter, Kushinada, and disguised himself as her, tricking the Orochi into getting drunk on sake and killing it. Inside its body, he found the sword Ama-no-Murakumo, which was later renamed the Kusanagi. He married Kushinada and presented the Kusanagi to his sister as a peace offering and was accepted back into the heavens.

Actually, scratch those bits about the gods in their high heavens, because these are the matters of people in the capital. Shinto is a catch-all term for largely unconnected folk beliefs across the different places in Japan. Some gods might be popular nationwide such as The Seven Gods of Fortune, but where there is a Shinto shrine, there is a local deity enshrined that only influences its immediate areas. People would pray to that god and throw a festival to honor it (or just to make a festivity, it's not like there were televisions to alleviate boredom in ancient Japan).

As for the God-Emperor belief, pre-WWII it was accepted that the Imperial family was divine, as descended from Amaterasu, and the Emperor was a living demigod note Specifically, the semi-mythical Emperor Jimmu was held as the great-grandson of Amaterasu, and since the traditional order of succession in Japan holds the royal line to have progressed completely unbroken since its founding (which, if true, would make it the longest continuous royal lineage in history), that would make the Imperial Family the direct descendants of the Creator Gods. Post-WWII, the Emperor was made to renounce his divine lineage. While the Imperial family may be revered or looked up to by the majority of Japanese, this is mostly ceremonial even for those who do believe in divine lineage, and outright worship of the Emperor as the one true God above all is reserved for the uyoku dantai - e.g. Japan's answer to Neo-Nazis.

There are also splits over whether non-Japanese can practice Shinto/convert to it. This is heavily generalized and controversial since Shinto is not an evangelizing religion and is a practice faith. One faction insists they cannot (the nationalists, and traditionalists in general, say that you have to have Japanese blood to be "true" Shinto), another insists they can via marriage (e.g. some more open Shinto practitioners say that if a non-Japanese woman marries a Japanese man, or a non-Japanese man marries a Japanese woman — no one has spoken out regarding same-sex relationships yet — that the non-Japanese person is automatically "in" or alternately can choose to convert, similar to ethnic Judaism), and the most open faction welcomes and embraces non-Japanese and accepts the idea that while the belief system is non-evangelical and non-conversive, that someone may identify strongly with it or practice similarly to it. For what it's worth, non-Japanese priests like American Koichi Barrish

Shinto is not necessarily an organized religion. There are common practices that most shrines agree upon, but there is no "true" set of beliefs that practitioners are expected to hold. Rather Shinto is a catch-all term for a series of native Japanese rituals that have a wide variety of origins. Similarly, no two temples share the same set of practices, and the religion is highly localized. There are a few recurring themes that most practitioners agree upon:

That's about all the shared traits that the various temples have. Some have festivals revering particular gods, some revere parts of the human anatomy (you know the part), some revere general concepts like love or fortune, and some just exist as a quiet space where Japanese people can get away from their workaday worlds and sip tea under the trees.

Shinto coexists easily with other religions. It shares the space in people's heart with Buddhism and Taoism. A common expression of Japanese religious belief is that the Japanese are born Shinto, marry Christian, and die Buddhist. This isn't a case of conversion throughout life, but the fact that the Japanese are quite comfortable picking and choosing which religious practices they like and ignoring the rest. Shinto is completely fine with this practice.