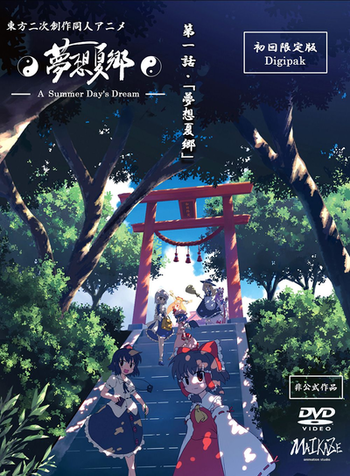 Musou Kakyou: A Summer Day's Dream is a fanime based off of the popular Touhou Project games. (Its official heading is Touhou Niji Sousaku Doujin Anime, "Touhou Derived Work Indie Anime".) However, unlike most fanime, this one has a significant difference: it was produced by the well-known doujin group MAIKAZE, who managed to gain a lot of notoriety with the project by roping in some very big-name voice actresses to help out (Rie Tanaka (Sakuya), Kikuko Inoue (the narrator), and Mai Nakahara (Reimu), among others).

It's springtime in Gensokyo, and Reimu is preparing for the annual feast. But something is amiss, as she soon finds out — the Hakurei Shrine's donation box has been stolen! And it's not just there, either; the Scarlet Devil Mansion and its library have been robbed as well. With the help of Marisa and Aya, can Reimu get to the bottom of this incident before the feast is ruined?

The first episode was released at Comiket 75, on December 29th, 2008, with the second episode being released at Comiket 82 on August 12th, 2012, episode 2.5 released on May 11th, 2014, and the third episode released August 13th, 2016; it was originally planned for a total of three episodes, but the end of the third episode suggested a fourth episode. The series was originally titled the Touhou Anime Project, but was changed to its current name after ZUN, the creator of the games, expressed concern over it being mistaken for an official product.

The site for the series can be found here

This fanime provides examples of: