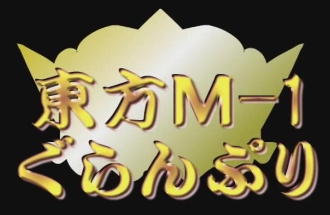 The Touhou M-1 Grand Prix 『東方M-1ぐらんぷり』 is a series of manzai comedy fan vids featuring Touhou Project characters, it has been released at various Reitaisai & Comiket conventions by R-note (formerly Yellow Zebra). The first two competitions had fan-made videos for the original audio plays, while the third and later competitions were animated by the artist tondex

『沌x』, and later two remakes of the first two competitions.

In-Universe the event was founded by Eiki Shiki, and is run by Rinnosuke Morichika plus different special guests. Four to six pairs of challengers compete, whose skits are then judged by a guest panel, with two finalists who face off to determine the winner. Being a comedy series, this doesn't always happen.

A complete list of English subtitled videos is available is here

Thank you very much!