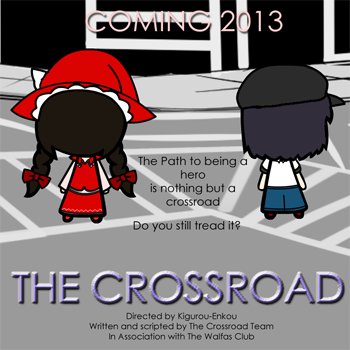 "There is a road filled with pain, struggling and endurance..."* Left: Alyss Baraen. Right: Makoto Yoshio
"Enter through the narrow gate. For wide is the gate and broad is the road that leads to destruction, and many enter through it. But small is the gate and narrow the road that leads to life, and only a few find it."
— Matthew 7:13-14
"I've made up my mind! I'm going to become a hero and protect this land!"
— Makoto (in all his heroic eagerness)

In the Touhou Project Walfas community, there exists a Walfaser named Kigurou-Enkou, who one day, in a conversation with a friend, came up with an idea for a huge feature-length comic story much like one of her favorite works, Diamond in the Rough (Touhou). So she gathered the rest of her friends from the well-known Walfas Clubs 1 and 2 and...

The Crossroad is a Touhou Project Webcomic made in create.swf, aka, Walfas. As you can expect, it is a Spiritual Successor to Diamond in the Rough and is a more focused Deconstruction on the Heroic Wannabe trope as opposed to all Self-Insert Fic tropes, making great use of several Walfas OCs and shows that not all OCs/Author Avatars are a bad thing.

Makoto Yoshio is a naïve young Middle-Schooler with strong dreams to become THE perfect hero. And he gets it. Being spirited away to Gensokyo, he decides to jump into the action he sees around him as he realizes just how HEAVY the population of heroes there is. Naturally, if he tries to fit in, everything will go well, right?

Wrong. His naïvety and ignorance of words of wisdom ends up setting a "chain of horrible, HORRIBLE problems". While the residents of Gensokyo are naturally annoyed but generally forgiving, that may all change...

Read the series at its gallery

. It was updated every Sunday until 9th August, where updates were only released "when appropriate". First comic here

The Crossroad provides examples of...