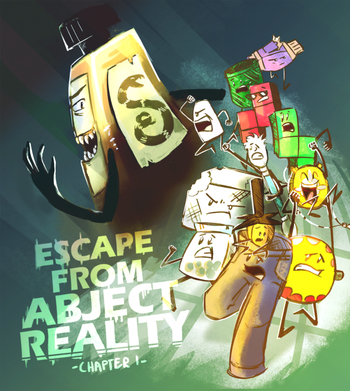 is a Singaporean webcomic by Punch-Holer

, and it is a pretty dark spin on objects shows. The first set of characters for the series (Snake Oil, Silica Gel, Squiggly, Z, Wet Wipes, and Jeans) were shown off

on her Tumblr blog on August 17th, 2017, but she eventually drew the whole cast and showed it off

three days later on the same blog. She eventually released the first pages of the comic on August 24th, 2017 on both Tumblr and DeviantArt.

There is an official comic dub, with the first part of chapter one

This dark and dramatic webcomic provides examples of...