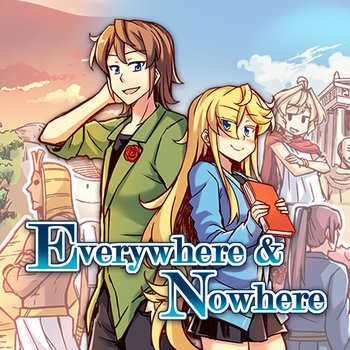 Flirting their way through history.
"Ever since the night that we died, we have been like we are now. Never belonging to any place, lost in time. Everywhere and yet, at the same time, Nowhere."
— William Rosencrantz
Advertisement:

After their deaths in the famous Shakespearean tragedy Hamlet, William Rosencrantz and Anne Guildenstern find themselves flung forward to the present day, and quickly discover that they are now immortal and can travel through time to any point in history, except for their original time period and, for some strange reason, Christmas Day, 2050 - apparently the day the world ends, because on December 26, 2050, everything has been reduced to ruin.

In order to ground them in a sense of reality, Rosencrantz decides to enroll himself and Guildenstern in a modern, upper-class high school, where the two of them meet friends, enemies, and try to experience some semblance of a normal life... while not going on adventures and meeting famous historical figures, of course. However, Rosencrantz has a deeper motivation for doing this than he originally lets on, as he has reason to fear immortality could take its toll on his and Guildenstern's sanity, although Guildenstern isn't entirely clueless about this, either...

Written by Merryweatherey (of I Made A Comic About Internet Explorer and Stalker x Stalker fame) and illustrated by PeaCh,

Everywhere and Nowhere is one of Merryweathery's lesser-known works, featuring a different artist than his usual partner Princess Hinghoi. Nevertheless, it's also one of his more plot-heavy comics, and has significantly more episodes and a more frequent update schedule than either Internet Explorer or Stalker x Stalker. The entire comic can be found on Webtoon

, and has a surprisingly frequent update schedule, with new episodes released every Wednesday and Sunday.

Tropes about Everywhere and Nowhere