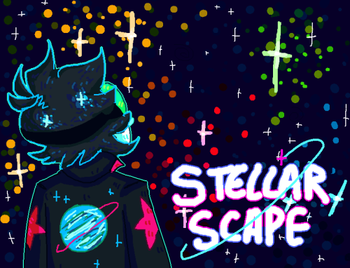 Stellarscape is a webcomic by tvmachine (formerly captainrigelorion, as credited on the comic's Tumblr page) and zenith-star, beginning on June 2, 2014, with the final comic update on August 15, 2015.
Advertisement:

Stellarscape revolves around an enthusiastic space captain, named Rigel Orion, who loves to explore the stars. Among Rigel's crew is Algol, Vega, Adhara and Procyon, who are all members of the Orion Unit, apart of an organization known as the TGC.

Unfortunately, the comic went silent before we could see much of their adventures, with only about 27 pages to date. However, it did have much supplementary material, including a Character Blog and a Bandcamp page for various characters' theme songs. There was also lots of additional artwork and content from the creators' blogs, but with the deletion of tvmachine's blog in 2019 and zenith-star's in 2020, there's currently no official way to access much of this content.

The comic can be read on its official Tumblr

(page 8 is currently unavailable due to being erroneously flagged as adult content by Tumblr), the Character Blog can be found here

, and the Bandcamp can be found here

Compare Milky Way and the Galaxy Girls, Nebula, My Moon and Planetary Moe for other works centered around anthropomorphic celestial objects.