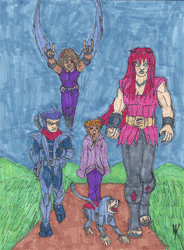 Elise Sasaki-Garcia is a 17-year-old girl who’s a huge fan of anime and young adult fantasy. Having woken up with metal wings on her back, she and her friend Ruby Harrison (who has been similarly transformed, in her case into a nine-foot-tall giantess) appear to be living out one of those stories, having joined other post-human teenagers in the fight against the twisted experiments of Beagle Labs. But Elise doesn’t remember how she got her wings, and the truth about her transformation may spoil her fantasy, if not her entire existence.

A sequel of sorts to Ruby's World by Neil Kapit, Ruby Nation is a long-form story-driven webcomic that intentionally deconstructs many tropes of the young adult superhero narrative. The characters around Elise, most of whom starred in Ruby’s World, are just out of high school, horribly scarred by their experiences, and grudgingly devoted to saving a world that doesn’t seem to want the help. Elise herself is more optimistic, but whether that’s due to a genuinely good heart, a complete lack of experience, or something entirely different has yet to be determined.

Unfortunately neither the comic nor its wiki are still being hosted.