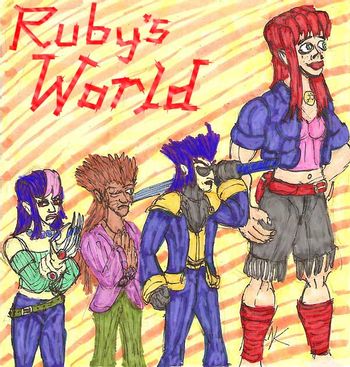 "We stick by each other and we stick by our principles. That's all we have left."
— Ruby, Ch. 17
Advertisement:

Ruby Harrison, age 17, is a high school student whose exceptional GPA belies an unhappy life. Her mother committed suicide two years ago for mysterious reasons, her father sublimates any affection into academic pressure, and she has a dysfunctional relationship with her childhood best friend. On top of all of that, a freak accident at the lab her father works for has transformed her into a superhuman giantess, nine feet tall and radiating magnetic power.

And that's just in the first chapter.

Ruby's predicament sends her into a much darker secret history, where she learns that the science that transformed her was not only part of an illicit super soldier program, but one conducted in part by her late mother. Joined with other young people that have received such genetic tampering, Ruby tries to bring to the world the human testing from Beagle Labs to light. But the more she tries to make sense of the world, the more complicated—and brutal—her world gets.

The series is concluded as of June 2011, but the storyline continues in Ruby Nation, which deals with the titular character building a refugee nation for young super soldier test subjects— and funding it by doing black ops work for the US Government.

You can read the entire series here

Tropes in this Webcomic