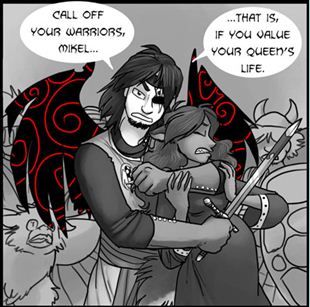 One of the lesser-known risks of pregnancy.

It seems to be a law of TV and film land, that any hostage situation will include at least one heavily pregnant woman. This can either be used to show how inhuman the hostage-takers are by having them use her as greater leverage or to show them in a better light by having them treat her with compassion. If she's more than eight months, she'll probably go into labor, and give birth to a healthy baby with the help of a nearby know-it-all kid, med-school dropout or, if they're really lucky, an off-duty nurse. Or maybe even one of the hostage takers. The Panicky Expectant Father will rarely be held hostage with her, and may even be with the police, constantly telling them, "My wife's in there!".

Either way, expect her to be the first one let go if the authorities arrange the release of some hostages as a sign of good faith, and additionally most hostage-takers know it's usually not in their favor to have such a possibly high maintenance hostage.

Sub-Trope of Imperiled in Pregnancy.