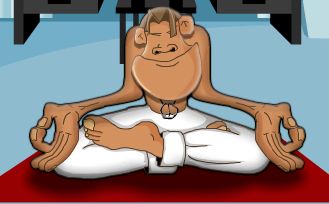 The Lotus Position, also known as Padmasana, is a posture used in Yoga and Meditation. It consists in sitting cross-legged with each foot placed atop the opposite thigh and the hands resting on the knees.

In fiction, this position is used as a visual shorthand for any character practicing meditation, using Psychic Powers or entering any kind of trance. In this context, the pose is used interchangeably with Sukhasana, another Yoga posture known simply as "sitting cross-legged". This will be so even if in the story's context (different world, time period, dimension, etc.) said character would have absolutely no contact with yoga or Eastern meditation techniques. Some characters tend to sit like this even in everyday circumstances, which usually serves to indicate that they are into meditation and Eastern spirituality, and have a meditative/spiritual mindset even in ordinary situations.

Beginners start with a Half Lotus, in which only one foot is resting on the opposing thigh. The Full Lotus is considered an intermediate or even advanced posture. The real-life purpose of the Lotus Position is to be relaxed enough to meditate but not so relaxed that you fall asleep, and to prevent the yogi from falling either forwards or backwards during meditation. See also the Useful Note.

See Levitating Lotus Position for when the meditator is also floating a few feet above the ground. Compare with Seiza Squirm, its Japanese counterpart. A comedic subversion of the trope often involves Asleep, Not Meditating. See also Mystical Lotus, the motif that this position is named after.