The two main characters of the story. Much of the focus stems from or surrounds them. They both belong to Kigurou-Enkou. 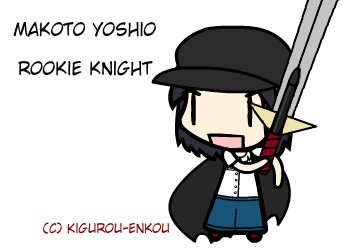 "My dream is to become a defender of justice!"

The protagonist of the story, Makoto is an energetic and naive middle-schooler who has made it his life's goal to become a perfect hero. After being spirited away to Gensokyo by totally-not-Yukari, like many others before him, he sets out to prove himself as a worthy hero. Things rarely go his way, no matter how many times he tries, and when they do... 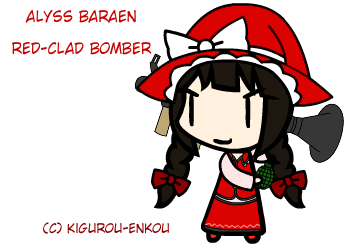 The Deuteragonist of the story, Alyss (real name Kazuko) is a plucky teenaged outsider who also happens to be the President of Visionary Requiem, the local Youkai-Protection/Relocation organization. She quickly becomes friends with Makoto, but is far from agreeing with his ideals. More often than note, she's giving advice to him on his heroism, trying to help him grow and mature.

Makoto's own Ragtag Bunch of Misfits when he decides to try out a Five-Man Band. All of them are rather loony, save for Rein. 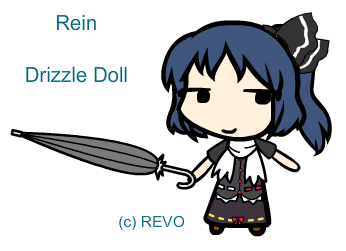 "You know, if you want this to work out, try not to forget whom you've saved."

The Only Sane Man of Makoto's team, but her reasons for joining Makoto are unknown. She mostly moves to wherever she wants, quietly being The Watson while also being a Deadpan Snarker along the way. She bears resemblance to Makoto's penpal, Etoile.

It turns out she is a Shinigami, and she is the one who brought The Valkyrie Zauber to Gensokyo, testing them as heroes and killing them. Even then, little else is known about her goals.

She is a character created by REVO, but was only featured in one song, Rein no Sekai

, so much of her character and backstory has been made by Kigurou-Enkou.

The Youkai Protection/Relocation Organization of Gensokyo, run by Alyss, their job is Exactly What It Says on the Tin. Ironically enough, it is started and run by Outsiders. They are not heavily involved in the story until later on, due to Alyss's personal issues with Makoto.

It was originally started by Alyss's good friend Elyse Hakujou and run by the rest of the Akimoto family. 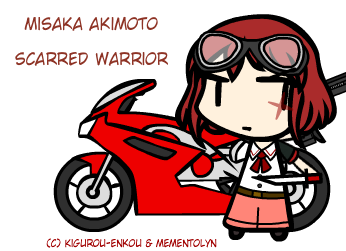 "The only person I can think of who comes close to being remotely stupider than you is my younger self..."

The Vice-President of Visionary Requiem and the Eldest sister of the Akimoto family, Misaka is an Ineffectual Loner and the Sour Supporter of the team, handling all the administrative things Alyss can't. Despite this, she makes it clear what she thinks of Makoto's idealism.

Five Human Planeswalkers who keep the Magic of Gensokyo in check, with the help of their weapons made by the Gods who chose them. They are one of Makoto's greatest sources of inspiration, and it doesn't help that he thinks of them as a generic human-protecting Five-Man Band. They try to be the Cool Teachers towards him, but considering what they did to him, it doesn't end so well. All of them really do not like Zero.

They all belong to PMiller1

Also take a look at PMiller1's Characters page for them for more tropes. 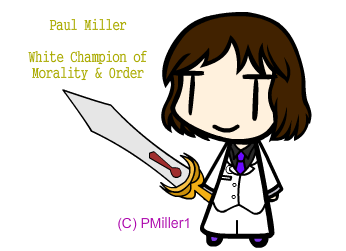 The White Champion of Morality & Order and The Leader of the Team, using White Magic to fight or take care of enemies. He's had an...interesting history, initially wandering into Gensokyo and being a Heroic Wannabe much like Makoto, even participating in The Shanghai War all because he felt a debt to Alice, even his sword (or rather the god contacting with it) disapproved of him. Still, he has improved, and the spark has since ignited, turning him into the Planeswalker he is now. 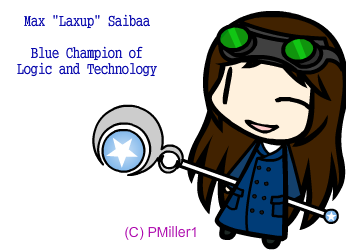 Blue Champion of Logic and Technology, The team Intelligence. Was an enemy from Paul, do to a believed that he was a killer. Do his action in Gensokyo, letter find her error and latter help Paul's for the Espionage along with Paul's sister Kari to spy on Zero. His then since ignited, being come the Planeswalker like all other. 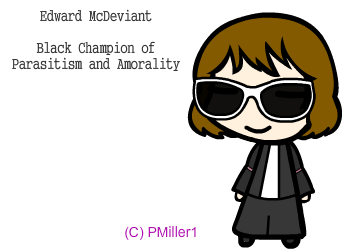 Black Champion of Parasitism and Amorality, The Team's second in lead, He are a young man, who power was Art Ability, that inculcate Dark Arts. He was the first to have his spark igniter becoming a Planeswalker with the power of Black Magic. He also Paul's best friend. 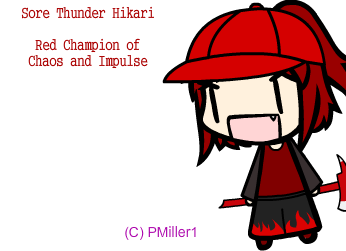 Red Champion of Chaos and Impulse, The Team's fire (and any other 'hot' element) work, she used Red mana to being goodness to the other with powerful results, She's Paul girlfriend and is a hothead. Just like what are All Red Planeswalker. 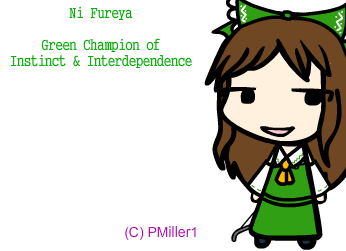 The Green Champion of Instinct & Interdependence, Ni is Reimu's other apprentice and half-sister, as well as the team Archer and Ranger who takes care of the Balance of Nature (Not Good and Evil). She was adopted by some outsider who gave her the Bow of Instinct and Interdependence and only came to Gensokyo for a job opening as Reimu's apprentice (even if she had one or two already). During that time, her spark ignited, turning her into the Planeswalker, she is sometime defends the Hakurei Shrine when Reimu is away. 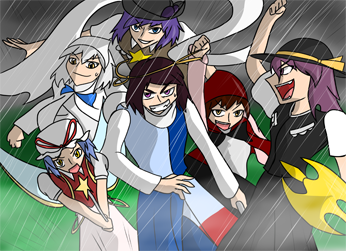 A group of Magical Girls (and one Boy) contracted with Incubator Keibey, they are another one of Makoto's many sources of inspiration. They are later killed by Rein for avoiding death by being long-lived Magical Girls as a result of their contract, endlessly carrying out their heroic duties. Makoto doesn't take their death well.

The Self-Proclaimed leader of the Valkyrie Zauber (at the very least the first Magical Girl).

The Hot-blooded, Deadpan Snarker but still rather wise mentor of the team. She appears very early in Part 2, being the mysterious stranger that Makoto offers his umbrella to. She was known to be a rather hard to work with member of the team back in their early days, but has since matured.

Level-headed magical boy (yes) and former Butt-Monkey of the team.

The most Deadpan Snarker of the team who has become quite dulled by her own life, but she's still a loyal asset to the team.

The youngest of the team (not just in appearance).

Characters without an Allegiance

Exactly What It Says on the Tin. Or rather, they are characters without a specified large group. For example, the residents of The Hakurei Shrine do not count.

An ancient youkai from before the Hakurei Border and Gensokyo, Kurisu is closely associated with Yukari, Yuka, and Mamizou. Despite this, he's basically passive and lives quietly in the Human Village, running a day care and zoo. However, it's a far cry from his early life as a mercenary.

and was typically shown in the works of SagashiIndustries

, though he has since been discontinued as a character.

An extremely friendly human boy who routinely hangs out with Team Nineball (mostly Rumia) and is training as Reimu's apprentice alongside Ni and Emma. As it turns out, he's a hanyou; half-human and half-darkness youkai. A few years before the story, Zero decided to kill him on a lark, leading Rumia to imbue him with her power of darkness, saving his life, but also turning him into what he is now. Despite an initial bout of violent insanity, Seth's managed to resume a reasonably normal life.

A gynoid living at Hakurei Shrine. Emma's story is extremely complex, and spans at least four different canons. She belongs to Michael-777

, who prefers to develop her character through roleplay rather than comics.

A young man from America (Texas, specifically) who sought out Gensokyo to escape the growing political corruption and moral bankruptcy of the First World Nations. Joe lives close to Misty Lake and generally keeps to himself, but does sometimes interact with others.