Film / On Body and Soul 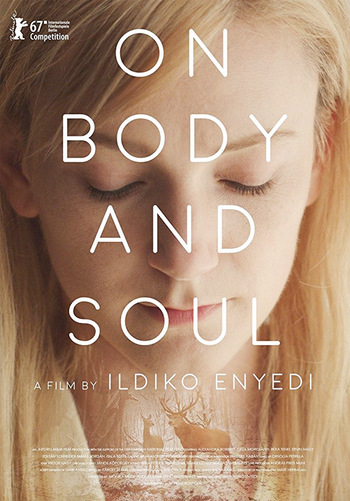 On Body and Soul is a 2017 film from Hungary, directed by Ildiko Enyedi.

It is about the tentative romance between Endre and Maria, two employees at a slaughterhouse. They both have their own problems. Endre is a loner who seems to shun social contact outside of work, and he has a lame left arm. Maria is on the autism spectrum. She's high-functioning (she's a college graduate who works as a quality inspector at the slaughterhouse) but she has many of the symptoms of autism: oddly formal in posture and manner, often sitting rigidly and motionless, unable to understand social cues, disliking being touched. When social interactions at work go poorly, she practices them with LEGO figurines at home.

Maria and Endre are brought together by an odd circumstance: they share the same dream. Namely a dream where they are two deer in the forest, she a doe and he a stag. After some plot contrivances lead them to discover this, they develop a relationship, which starts to deepen, but both hesitate at making the emotional leap of faith.