Note that many tropes below are spoilers simply by virtue of being on the trope list. Since spoiler-tagging trope names is against the Spoiler Policy, these spoilers will be untagged. 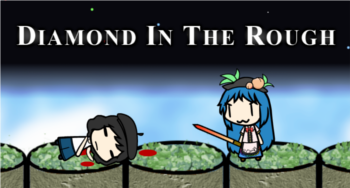 Who doesn't love a good Downer Ending?
Chen: You know what's more disappointing? The fact I could have watched an intense battle, but instead, I had to watch *you*. Even if you had gone, you would have just won instantly! Where's the excitement if I know you'll win?!
Advertisement:
Brolli: You know, nobody likes stories where the hero fails.
Chen: Yes they do: they're called tragedies!
"I will be different."

Brolli Diamondback's story follows the typical pattern of the average Touhou Project Self-Insert Fic: average kid gets gapped into Gensokyo by Yukari Yakumo, gains superpowers, makes friends with the entire cast, goes on a grand tour of Gensokyo with nothing to stop him, falls in love, and he plans to resolve the biggest incident in the history of Gensokyo. After which, he will live happily ever after.

Part bad fanfiction Pastiche/Deconstructive Parody, part straight Deconstruction Fic, animated in the create.swf "Walfas" Virtual Paper Doll engine with a speech-bubbles-and-animated-sequences style akin to Koishi Komeijis Heartthrobbing Adventure, this is Spaztique's Diamond In The Rough: the first Walfas movie. Although originally streamed monthly as one full cut on a livestream, complete with an intermission, the movie was recut for Youtube into episode-sized portions, though the endings advertised the full movie stream around the time it premiered.

Originally written as a critique to an actual Walfas user, ColonelDiamondback, whose videos are recreated and restructured in the opening half, who has since gotten way better at writing since this movie. The original version was only made of Episode 17-20, but when fans demanded a full movie explaining the backstory, the result was a 4-and-a-half hour epic with two intermission sequences when streamed live. For more info behind how it was made, read the official companion guide, The Definitive Guide to Diamond In The Rough

In addition to being known for playing with bad Touhou Self-Insert Fic tropes and its dark ending, its Troubled Production makes it the Walfas equivilent to Apocalypse Now, with some complaining that the film would never get done.