Characters / Diamond in the Rough (Touhou)

The Gappies and Other Kids

Gappies, or Gappy Stus, are children Yukari gaps into Gensokyo, often because they have a power to unlock, because they have a terrible life in the outside world, or because they're The Chosen One to resolve an incident. However, we learn that nearly every single Gappy has gone corrupt and are then killed by the residents. It is unknown why Yukari gaps these children in or if there's a pattern in the kids she picks... There is an obvious pattern for Wish Fulfillment regarding why she picks the kids she picks. She has three primary reasons for gapping in children: to restore the peaceful ecology of Gensokyo by contrasting it with the heinous acts of the outsiders, to remove troublemakers from the outside world, and... well... since Yukari is a youkai... 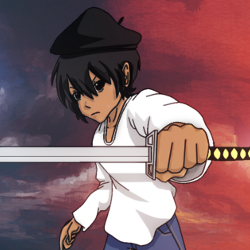 "I will be different."

"He can't take my stuff from me! A man *is* his stuff! He's taking part of my manliness!"

Warning: This bio contains dozens of spoilers for both the story and Brolli's character arc.

The Doomed Protagonist of Diamond In The Rough, who will die in three months of entering Gensokyo by Tenshi's hand. Before this, he was an Ordinary High-School Student who dreamed of an easy, carefree life. His dreams get answered when he is invited to Gensokyo by Yukari Yakumo, but it does not solve his laziness and self-centeredness. After growing tired of Reimu's Jerkass behavior towards Gappies, he learns stealing and destructive firepower from Marisa while allying himself with the Moriya Shrine. He also starts a heavy sexual relationship with Reisen, originally to get free medicine. As Gensokyo begins to fall apart, he begins questioning whether or not he's truly a good person or if he's just using others as a means to an end.

In the end, nearly all of the factions in Gensokyo systematically betray Brolli when Tenshi causes an incident to make people realize just how much they really hate him. Naturally, Tenshi ends up killing him.

The Gappy before Brolli, who went to Gensokyo solely to lose his virginity at any price. Ends up in a relationship with Yuuka, which later turns out to be rather forced on his end after accepting her bluff to kill the nearby human children. When the youkai hunters prove ineffective in killing him, Victor Chaos lulls him into a false sense of security and murders him. His soul is then sent to burn in hell.

"I should be over there. I'm clearly the much better person."

One of Brolli's classmate's and Yukari's second choice for her apprentice. He is more typical of most Gappies: well dressed, craves adventure, and thinks the world revolves around him. However, he is refused by Yukari since Brolli is lasting longer than she expected, angering him greatly. Later conversations with Yukari reveal he wants to go to Gensokyo because he can't get what he wants in the real world.

In the end, he replaces Brolli, obviously doomed to the fate of the Gappies before him, only now it won't be at the expense of Gensokyo.

"You do *NOT* want to know where that noise is coming from, and I hope you never find out! But the fact you've been hearing it means you're just as screwed as I am...

One of Brolli's classmates who apparently knows about Yukari. He was invited to Gensokyo to kill Arturo after he had gone rogue. After killing him, getting revenge on an innocent Yuuka, and accidently burning the remainder of the human village's children with Mokou and getting away with it, he asks to escape Gensokyo, but Yukari tells him that he'll never recover. Ever since, he has been on a long mental downward spiral.

Notable among the gappies in that he is a rare instance of a "good" gappy, although like every other gappy, his obsession leads to his destruction. His story inspires Tenshi to plan an incident to finally show the residents of Gensokyo what will happen if they continue fueling a Gappy's wishes.

Two of Brolli's classmates, looking into the strange humming sounds and disappearances.

Tropes associated with Steve and David:

Based on characters by the real ColonelDiamondback, but slightly retooled. They are incarnations of the sins of Brolli's past lives, sealed as far away from Brolli Diamondback as possible. By themselves, they are ridiculously powerful, but as a group, they are infinitely more powerful than any being in Gensokyo.

Tropes associated with The Diamondback Beasts:

A wolf youkai who acts as the "heart" of the Diamondback beasts, idealistic and quick to protect Brolli at any chance. Ferin is the culmination of all of Brolli's previous incarnations' pride, urging Brolli to be smarter and stronger than everyone else. He is the leader of the Beasts, just like Pride considered to be the deadliest of all sins.

"These humans want me to test the integrity of their mattresses."

A moon rabbit will the ability to hypnotize people, burrow underground, and sports two spiffy danmaku revolvers. He also loves women and is a huge flirt. Lepus is the culmination of all of Brolli's previous incarnations' lust, giving Brolli the ability to influence others at command.

A kitsune with the power to manipulate light. Velupe is the culmination of all of Brolli's previous incarnations' vanity, protecting Brolli's image.

"A key to power is the fear of loss, therefore threats are a legitimate strategy."

A dragon and the strongest of Brolli's beasts. Has the key ability to manipulate pressure, giving him the ability of both wind and fire. He is responsible for destroying one of the human villages since they were too close to one of his diamond mines. Hydrus is the culmination of all of Brolli's previous incarnations' wrath, tapping into Brolli's violence and need for domination.

Inhabitants of Heaven and friends of Tenshi Hinanawi. They become stage bosses in the climatic incident.

Tropes associated with The Celestials.

A celestial who is friends with Tenshi. Had an unbeatable shogi record until Brolli beat her. Ends up being the Stage 5 boss for the incident, and is shot down by Miko.

Brolli's cat, who is punted off the couch by Brolli. It later turns out Brolli really did care for his cat, but by then, he's been dead for roughly two months.

A character by MiniWitch3, he's a wolf tengu who works with Momiji, much to her chagrin. He ends up replacing Momiji when she is framed for friendly fire and exiled.