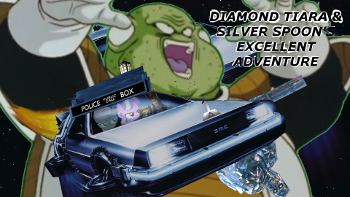 "The past won't know what hit it!" And neither will your brain...
Advertisement:

A My Little Pony: Friendship Is Magic Round Robin fanfic by Insaneponyauthor, and a loose sequel to Tealove's Steamy Adventure.

Diamond Tiara and Silver Spoon think history class is boring, so they do the only logical thing: get their own time machine and go back to change the past. But they wind up in the future instead. And from that moment forward (and backward), nothing goes according to their or anyone else's plan.

A drink of memory-enhancing tea leads to a showdown in a storehouse of magickal artifacts. A meeting with their time-displaced selves reveals a horrible truth about Diamond and Silver's future (and incredibly irritates Twilight Sparkle). A revolution in the ancient Earth Pony kingdom puts the power to destroy all of reality into the hooves of a lunatic. The secret of Diamond and Silver's destiny gives them a power that just might save them... or kill them. And whether they're in the future, the past, or the halls of the multiversal time police, the two fillies keep crossing paths with a mysterious zebra with unclear motives.

Will the two spoiled brats be able to fix the time stream and go home? Will Diamond Tiara ever admit her feelings for Apple Bloom? What is the deal with Baron Zeppeli, anyway? Why is Luna dressed like a pirate? How many licks does it take to get to the center of an entire planet made of candy? Is Zebrew really the most interesting language in the world? No, seriously, what's Baron Zeppeli's deal?

Meanwhile, yesterday, in the trope examples: