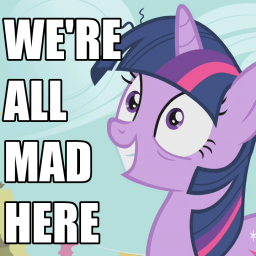 We are Insaneponyauthor, and so can you!

Not actually a pony, and not actually one author. Possibly insane, though.

is a single alias shared among a varying number of brony tropers. They collaborate (in the loosest possible sense) on Round Robin fanfics. Specifically, these fics are Exquisite Corpses: anyone who contributes to a story is only allowed to read the section immediately preceding their own. Naturally, this results in stories full of plot holes, Character Derailment, and similar nonsense. Hopefully, it's amusing nonsense, at least.

Though none of the stories are direct sequels, the number of Call Backs and Continuity Nods means that they do all take place in the same universe, even if the continuity of that universe is a bit slippery.