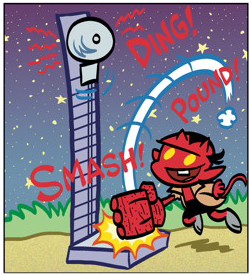 Also known as a "high striker", "strength tester", and "strongman game", this attraction is a staple in carnivals and Amusement Parks, where the contestant uses a mallet to hit the button or puck on the base. The button is attached to a lever which causes a weight to fly up a tower. If the button is struck hard enough (or a rigged version is hit the right way and merely permits the whacker to make progress) and the weight reaches the top of the tower, it rings a bell that's suspended there. The game usually has different "scores" written on the side of the tower denoting the player's Power Level, such as "wimp", "strong", "Hercules", etc.

In cartoons and series featuring characters with Super Strength (or are just ridiculously strong), a common occurrence is for someone to hit the device so hard that the weight hits the bell and sends it flying into the air. Sometimes characters forego the use of the mallet and just hit the device with their bare hands.

Conversely, the device can be used to set up a joke where a character makes a pitiful showing, either because he's just that weak or because somebody sabotaged the works to mess with the user.

Though high strikers are the most commonly seen, any arcade or fairground attraction that tests the player's strength counts.

In Video Games, the strength test game, when it appears as a Mini-Game, oftentimes tests the player's timing.

Not to be confused with the "Test Your Might" minigame from Mortal Kombat.

Scooby-Doo's tail is surprisingly strong enough to ring the bell. And then the Funland Robot destroys the game

Scooby-Doo's tail is surprisingly strong enough to ring the bell. And then the Funland Robot destroys the game