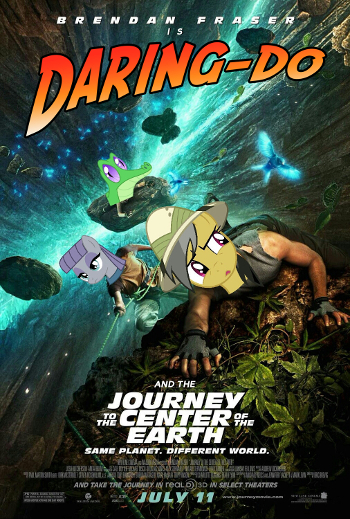 “Next time I’m trying to save you from a thousand-foot drop, let me know when you’ll survive me abandoning you.”
"I've been betrayed, doublecrossed, played like a damn fiddle, lied to, booby trapped, and quite possibly bamboozled across this whole misadventure. So please, forgive me if I seem out of sorts."
— Daring Do
Advertisement:

A My Little Pony: Friendship Is Magic Round Robin fanfic by Insaneponyauthor, and set in the same verse as their prior fics.

Daring Do is seeking the underground City of the Talking Dogs. Maud Pie is hunting a talking dog who stole her sister's soul. Naturally, they cross paths and decide to team up.

A bewildering array of villains stand against them: Diamond Dogs, magma dinosaurs, gun-wielding apes, time travelers, an army of bat ponies and lizard ponies, a council of interdimensional evil, and a possessed crown. But those villains are about to learn the hard way that no force on Earth—or under it—can stop the dynamic duo of Maud Pie and Daring Do.