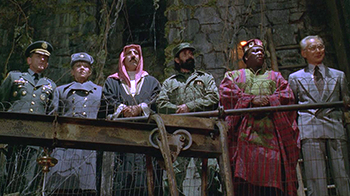 "As soon as the Indian Chief gets here, we can begin."
"We then pan up to get a clear shot of the big shots on the catwalk, and here's what we find: 1) a guy wearing an American army general's uniform, 2) an obviously Russian woman wearing a big Cossack hat, 3) a Yasser Arafat-type with a kaffiyeh on his head, 4) a dead ringer for Fidel Castro, 5) a black guy in a dashiki, and finally, 6) a Japanese guy in a business suit. Nope, not one single stereotype in the whole bunch."
— The Agony Booth, describing the trope picture for their Batman & Robin recap

The Omniscient Council of Vagueness is in session! And what's this?! The shadowy faces are actually lit!

Well what do you know? It's the employers of the Equal-Opportunity Evil Mooks and the patrons behind the Five-Token Band! These people can be any kind of congregation, whether to play poker or plot the downfall of western civilization, but are nonetheless very heterogeneous.

Options include both sexes (but usually just one woman), ethnically, religiously and geographically distinct people, always in the regional chic rather than western business attire (except maybe one). A comedy can even highlight this by using ridiculously cliché or period dress, such as the Mexican delegate dressing like a 1910 bandito/revolutionary, the Russian contingent in Cossack dress or a military greatcoat and ushanka in the summer, or an American in a cowboy suit. If they aren't outlandish/foreign enough, expect them to layer their English with lots of gratuitous phrases or accents. In fantasy and sci-fi settings where fictional races exist, you can expect them to have a few seats as well.

The one trait that ties everyone together is that they are all in possession of skill, authority or money, and in excessive amounts. The members will probably be heavily accessorized with gaudy jewelry or a scar to prove their moral alignment. In short, the implication is that each and every member has a varied and storied past... which we very likely won't learn.

Aside for positions of leadership, they also often appear as a group of prospective customers for a Mad Scientist or Corrupt Corporate Executive to sell his newest project/invention/acquisition to (see also Auction of Evil).

Related to Gang of Hats: especially when dealing with meeting the heads of groups. Also related to the "How different" aspect of Conservation of Ninjutsu.

Common members of the council include but are not limited to: a Lady in a Power Suit (often with corresponding Power Hair), an Inscrutable Oriental (albeit usually in a suit these days, instead of in more old-school East Asian garb), an Arab Oil Sheikh, a Fake Russian, and The Generalissimo.

Frank Drebin takes on a council of world leaders looking to attack the US.

Frank Drebin takes on a council of world leaders looking to attack the US.