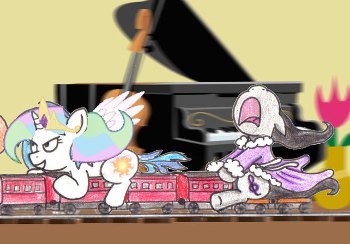 A My Little Pony: Friendship Is Magic Round Robin fanfic by Insaneponyauthor.

On a train trip to a family reunion, Octavia Melody finds a once-in-a-lifetime chance to have an adventure and meet the Princess. She leaps at the opportunity... and lands in a hospital, with no memory of how she got there, and no memory of the Sun Princess who's now madly in love with her. Princess Celestia, for her part, wonders what she can do to restore Octavia's memory—or has she already done too much?