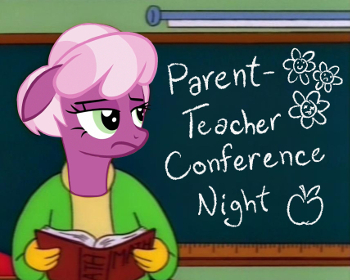 "The drugs were beginning to wear off."
“Alright, Cheerilee, the night you’ve been dreading all year is finally here, but you’re going to get through it. You always do,” she told her reflection.
Advertisement:

A My Little Pony: Friendship Is Magic Round Robin fanfic by Insaneponyauthor, set in the same 'verse as all their prior fics.

It's Parent-Teacher Conference Night at Ponyville Schoolhouse, so it falls to Cheerilee to deal with a building full of the most irrational, unruly ponies in Ponyville—and their children, too. As if that weren't already stressful enough, Cheerilee also has to contend with bizarre interruptions from time travelers, would-be conquerors, unpleasant transformations, and hallucinogenic drugs.

She's gonna need a stiff drink when this is all over.