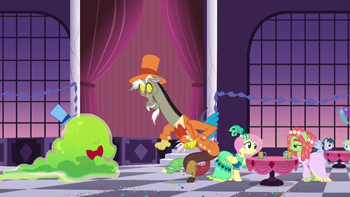 Nothing can stop the Smooze... from PARTYING!
"Can you imagine how dull it would have been if I hadn't invited Discord? Come on! WOO! The night is still young!"
— Princess Celestia
Special Guest Star: John de Lancie as Discord
Written by Natasha Levinger
Advertisement:

While talking with Discord at their Tuesday tea party, Fluttershy mentions the upcoming Grand Galloping Gala. Discord is eager to go with her, but Fluttershy, assuming Discord had received his own invitation, already invited a new friend of hers named Tree Hugger. Discord tries to pretend it doesn't bother him as he storms out of Fluttershy's cottage. He visits the rest of the Mane Six in hopes of being invited by one of them, but he finds out they're all taking their sisters to the Gala (except for Twilight, who is in Canterlot preparing for it with Princess Celestia). While at Pinkie Pie's cake shop, Discord spots Fluttershy with Tree Hugger, whom Discord immediately takes a dislike to. He returns home in a huff and spends some time stewing over Fluttershy taking somepony else to the Gala, until the mailpony arrives with a ticket. It turns out that Discord is invited after all, but the mailpony had trouble finding his way to Discord's house. While Discord is excited to go, he decides that he can't show up alone...

The night of the Gala, Discord arrives with the Smooze, a sentient green blob that constantly tries to eat shiny objects and grows with each object consumed. Twilight, who has taken on the responsibility of helping Princess Celestia organize the event, warns Discord to keep the Smooze under control. Discord halfheartedly assures Twilight he will before going off to interrupt Fluttershy and Tree Hugger's conversation. However, Tree Hugger is so calm and mellow that she's not at all bothered by Discord's thinly-veiled hostility. While Discord is distracted, the Smooze begins eating the jewels off of Rarity's dress, covering her in slime and causing a commotion. Twilight again admonishes Discord to keep the Smooze under control, and Discord reluctantly cleans up after the troublesome creature. He then proceeds to ditch the Smooze by locking him in a storage room, not noticing that the shelves are filled with all manner of gold and jewels.

Throughout the night, Discord does everything he can to prove that he's better than Tree Hugger, including performing a (bad) stand-up comedy routine after Fluttershy calls Tree Hugger "funny". While he's doing this, the Smooze, having grown to an enormous size, breaks free of the jewelry room and covers the entire floor in slime. Twilight and Celestia find that their magic is ineffective against the blob, but Tree Hugger manages to calm the Smooze with some soft singing, causing it to gather up in one place and release everypony. Fed up, Discord rips open a portal to another dimension, intending to send Tree Hugger through it, but Fluttershy angrily demands that he stop. Discord argues that Tree Hugger was driving a wedge between them because Fluttershy invited Tree Hugger instead of him. Fluttershy counters that just because she invited somepony else doesn't mean that they aren't friends, pointing out that it's possible to have different friends for different reasons. Finally realizing his mistake, Discord releases Tree Hugger and pulls the contents of the treasury room out of the Smooze, returning the blob to normal size. Discord apologizes to Tree Hugger for his irrational jealousy and also to the Smooze for ignoring it all night. Twilight apologizes to Princess Celestia for a ruined Gala, but to Twilight's amazement and confusion, Celestia replies that it was the most enjoyable Gala in years and that she's glad Discord was present to liven things up. Celestia then leads Twilight back onto the dance floor, saying that the night is still young.

Maud Pie: You're the most basic of jokes.
Waldorf: Why, she's almost as good at heckling as we are!
Statler: Even if she sounds a little hoarse!
Both: Dohohohoho!
Feedback

The most fun gala in years

Even Twilight couldn't believe that Celestia actually loved Discord and the Smooze's meddling with the Grand Galloping Gala.

Example of:
Won't Take "Yes" for an Answer

The most fun gala in years

Even Twilight couldn't believe that Celestia actually loved Discord and the Smooze's meddling with the Grand Galloping Gala.