All of Time at Once 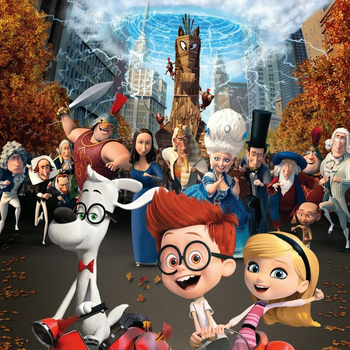 Welcome to your favourite Sci-Fi show, where the intrepid adventurers are about to explore the Beyond yet again. In this episode, though, the plot isn't exactly saving the day. It's more like saving all the days. We open with a sweeping establishing shot of the Pyramids of Southbank, dinosaurs ridden by Chairman Mao and Marie Antoinette stalking past. Something, perhaps never explained, has caused all moments in time to be perpetually present — and somehow all contain the same space, too. Alternatively, your adventurers' journey through the plot is what triggers a Time Crash that results in some kind of chronological collapse. This version is more likely to keep your historical figures and landmarks separate, but even then time isn't going to move, and you're going to be trapped in the entire Universe condensed into a split second.

Either situation might not focus on the science aspect of science fiction too much, and rather than a trapped-in-time situation or frozen timeline mess, everything that the viewer is expected to recognise has been gathered together to be happening at the same time as each other, but time continues moving. This is probably your safer option, as it's a lot less taxing on the mind whilst still being easily recognisable as a result of breaking or screwing up the timeline.

Of course, this happening can also create problems when your main get-out clause is Time Travel. It may have got you into this mess, but it probably can't help get you out, as either the accepted timeline that you've been galavanting through is in another reality and/or your time machine can't break out of the "now". You're going to have to find a way to reverse what you did to cause it, usually revolving around people meeting that never should, oddly enough, or a massive frickin' space war. There may also be a timer set as to how long you have to fix time before it completely implodes and, well, not to worry about because then nothing will have ever existed.

It's generally accepted that if this happens then you've really messed up. In fact, it might be used in the story as the default way to show The Biggest Time Travel Screw Up Yet, because just putting Hitler in charge wasn't enough of a consequence for your reckless time-hoppers.

Sub-Trope of Time Crash, your all-purpose shop for different ways to affect history (a.k.a. the catalogue of negative time travel effects), this being one of the potential outcomes of bruising up time a bit. Compare Merged Reality and When Dimensions Collide.

See also: Time Stands Still, when everything effectively freezes in place but for a select few — usually the heroes — time keeps moving. If you're one of the people who appear to have frozen, it may well be that you experience all of time at once: it may be explained as a massive effect version of localized time dilation in which you are experiencing time at a natural pace, but it's comparatively so slowly that you appear frozen, whilst you can see non-frozen peoples' entire lifespans pass in a second. Place Beyond Time, for somewhere that exists outside temporal reality, so it's effectively experiencing none of time at once and may have a viewing platform so you can look at all of time at once.