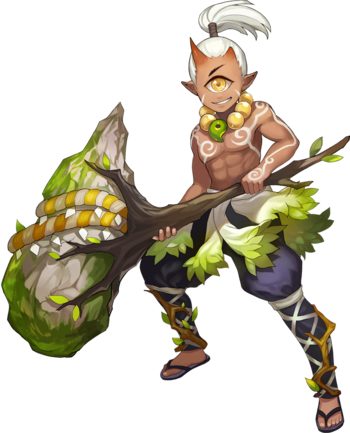 While most often seen in fighter games, this character will occasionally appear in RPGs. This is the one with the usually shaggy, muscle-bound and under-dressed appearance who's from the past/from a jungle/victim of a military experiment. The Wild Man will often use primitive means of attacks, such as big blades or clubs (gee, who would've thunk it?) and some times slightly more advanced weapons which you're not really sure how they manage to be good with (bombs, usually).

When this character shows up in RPGs, it will often overlap with The Big Guy trope, but as far as fighters go, this character will usually be the odd looking guy with increased strength/agility and animal-based or generally very melee-based attacks, probably The Berserker.

Compare to Wild Child or Jungle Princess. May "evolve" into a Beast Man if exposed to magic or genetic engineering.

This trope is Older Than Dirt, first appearing in The Epic of Gilgamesh.