Fanfic / A Different Kind of Truth 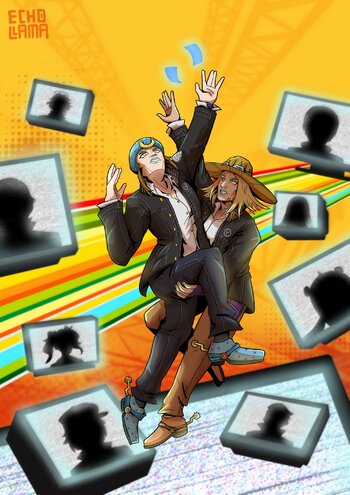 This story is the tale of Johnny Joestar starting to walk.
Not only in the physical sense, but from adolescence to adulthood.
In this tale, Johnny Joestar begins to learn that he doesn't need to be alone.
That bonds with others can help the broken bird fly again.
Advertisement:

The author has also brought the fic into Spacebattles, which can be found here

. He also has written a self-parody titled A Different Kind of Truth Abridged (?), which can be read here

Warning, it's very long —>Gyro Zeppeli: I'll summarize your whole world view, and I'm doing it because it's so pathetic and childish that I can't help but see it a mile away. You...Or the real sad sack of shit who'll need a good prison dentist soon, aren't exactly the most social types. You've got niche hobbies like reading comics and playing video games. Maybe your parents ribbed you once or twice hopping that would get a different interest, only for that to not pan out. Hey, it happens. And talking to other people is so much work! You gotta bullshit and talk to them about crap you don't care about, so you try to force conversations to go your way so you feel included and not just the quiet guy hanging around at the fringes of the group. Only...they stop going to you. They start hanging around in their own circle of friends who share a lot more in common with them, leaving you to the side. And what do you do in response? You stop making the effort. You don't understand what you did wrong. As far as you're concerned, it's everyone else's fault! They didn't understand you! They couldn't accept you!
Shadow Mitsuo: Because that is the nature of humanity. Bonds are...
Gyro Zeppeli: Oh spare me that bullshit. It wasn't the nature of humanity. They just got sick of your whiny uncompromising bullshit and decided you weren't worth the effort. Because you didn't try to meet them halfway, and that's what actual friendships are about. To get things back on track, you then decide that going outside is too much work! So you just sit inside playing video games or jerking off. Because, hey, at least you're impressing the forums and those cute cartoon girls think you're cool!
Shadow Mitsuo: Please. Validation from other humans as I am are...
Gyro Zeppeli: Empty? Because they had lives of their own? You...The real you...Probably saw that less and less of his fans were returning. The chat rooms were getting bare. Because, hey! Turns out they had school, or maybe they were going out to the movies with some friends! Maybe even going out on a date! All of them, living their lives with people other than your sorry ass. Hell, and you even knew that the guys who made the porn you love so much have careers. They had aspirations and were doing what they loved. Meanwhile, there you were. Just jacking off alone in front of your computers or televisions.
Shadow Mitsuo:...Be silent.
Gyro Zeppeli: Why? Because I'm getting warm? It wasn't fair to you, was it? That everyone but you seemed to have a life. That couldn't be true, could it? So what did the big and strong Mitsuo the great do? He told himself one lie. That deep down, everyone was no different than him.
Shadow Mitsuo: Be silent.
Gyro Zeppeli: It's pretty damn pathetic now that I say it aloud. But then in came Johnny, and you thought you had him all figured out when you latched onto him like a leech. Here was somebody that seemed to fit your idea of another human being. Someone who was rude, that was prickly, and had a niche hobby. Someone who, apparently, had issues nobody could possibly understand. But you saw one thing. One thing that separated Johnny Joestar from Mitsuo Kubo. He tries. He feels out of place whenever he talks to us. Sometimes he doesn't even want to be with us. He hesitates and sometimes says a bunch of shit like a jerk. But you know what? He apologizes when that happens. He still makes an effort, even when there's no gain for him. He doesn't believe in relationships are something he wins a gold star for attending. He tries...meanwhile, you just sit in your room playing video games. You run and hide, like a coward.
Shadow Mitsuo: Be silent! You know nothing, Gyro Zeppeli! You, who were without the crushing loneliness! You who have it all, and would be just as empty as I without them! Johnny Joestar is seeing that! He knows as well as I do what empty lives humans lead! How bonds between friends and family are the barest of playacting...
Gyro Zeppeli: Oh spare me, you big baby. You didn't stick Johnny in that dream world because you thought he was like you. You put him in there because you hated how he was everything you weren't. In conclusion, humans aren't empty. We don't just ditch each other whenever a relationship becomes inconvenient. And maybe...It was just you the entire time.