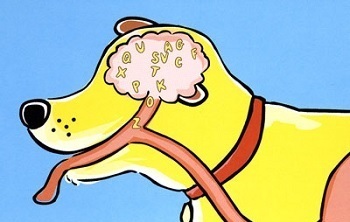 On the way to Martha's stomach, the alphabet soup lost its way. It traveled to her brain and now she's got a lot to say!
Why bother reading if you can just eat knowledge? This trope is about characters who, due to some Bizarre Alien Biology, Applied Phlebotinum, or simple artistic license, can have knowledge directly pumped into their brains by eating or somehow absorbing knowledge recipients such as books, computers or Magic Balls of Holding Knowledge.
Advertisement:

This however only applies to non-organic knowledge sources. If a character learns by ingesting Brains, that is simply Cannibalism Superpower, which not only is frowned upon by connaissance connoisseurs, it's also considerably more messy.

See also Powers as Programs, for abilities instead of knowledge, and Instant Expert.

A subtrope of Abstract Eater and, through that, of Fantastic Diet Requirement. Ingesting Knowledge is a common ability of the Literal Bookworm.

Eating a tablet for knowledge

Hearing that a tablet contains the sum of all human knowledge, Yakko takes it all in, literally.

Eating a tablet for knowledge

Hearing that a tablet contains the sum of all human knowledge, Yakko takes it all in, literally.