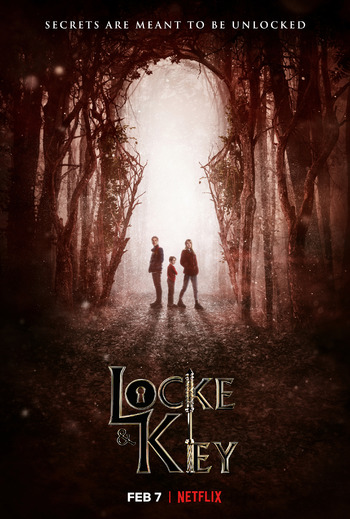 Locke & Key is an American supernatural series released on Netflix. Based on the comic book series of the same name created by Joe Hill and Gabriel Rodriguez, the show centres on the Locke siblings as they move into their ancestral home following a tragedy.
Advertisement:

Just before the story began, the Locke family were attacked by a classmate of the kids, resulting in patriarch Rendell's death. In the wake of this tragedy, his wife Nina moves with her three children, Tyler, Kinsey and Bode to her husband's ancestral home, Key House, in Matheson, Massachusetts. It quickly becomes apparent that there is more to Key House than they initially believed. Hidden around Key House and other places are magical keys that have an array of special powers or grant abilities to the user, but adults cannot retain memories of seeing this magic. The more keys they find, the more the Locke siblings discover they are not the only ones aware of them. This leads to an unraveling mystery that reveals the history of the Locke family, darker secrets under the city of Matheson and why their father was murdered.