Fanfic / Through the Eyes of Another Pony 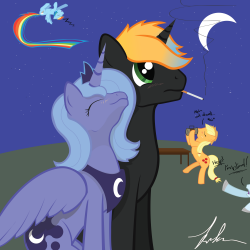 This is the kind of thing every brony wishes for...minus the whole Nightmare thing.
"So yeah, I'm a human.  And now I'm a pony.  No, that's not a joke, though I would laugh if it were.  All I did was party at my place and pass out, only to wake up in Ponyville.  Now you must be thinking I had one too many, and I'm right there with you.  But no drunken hallucination lasts this long and whatever the case, The Nightmare seems to have a problem with me.  A big one.
Advertisement:

So now, armed with my cigarettes and some cool unicorn magic, I have to fight off The Nightmare, my own Fanbronyism, and try to find the time to let the ponies give me a name.  I know, I suggested getting a pony name first, but they're pretty excited about that.  Not sure why.  All of the ponies in this town are crazy.

You can find my story here

Unfortunately, due to the author's sporadic appearances on Fimfiction, the story is yet another instance of a Dead Fic.

This My Little Pony: Friendship Is Magic Fan Fic provides examples of these tropes: