Film / My Stepmother Is an Alien 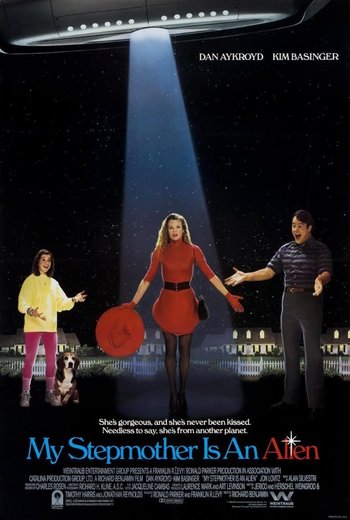 My Stepmother Is an Alien is a 1988 American comedy science fiction film directed by Richard Benjamin and starring Dan Aykroyd and Kim Basinger, with Jon Lovitz and Alyson Hannigan also appearing.

Steven Mills (Aykroyd) is a widowed scientist who is working on different ways to send radio waves into deep space. Steven accidentally sends a radio wave out of the galaxy to an alien world, which causes a disruption of gravity on her planet. One alien, Celeste (Basinger) is sent to investigate what affected the gravity and how it was done, believing it was an attack. Celeste arrives on Earth by crashing a party hosted by Steven's brother Ron (Lovitz), after which she moves in with Steven. Steven's 13-year-old daughter Jessie (Hannigan) is at first happy that her father has found someone (her mother died five years previously) but becomes suspicious of Celeste's inexperience with Earth's customs, but she cannot convince her smitten father that something is unusual about Celeste. Along the way, Celeste encounters new experiences, including love.