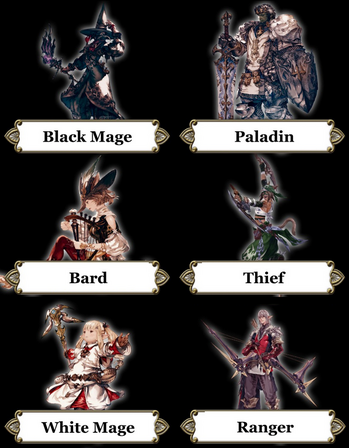 All the five main roles... and the bard.
Ryuji: Hey, wait! This place is treatin' us like a party of RPG heroes, right? How 'bout we decide each other's job classes? Y'know, like Warrior and Priest and stuff!
Futaba: Well, Joker's definitely the Hero. Queen's the Martial Artist. I guess Mona would be the Mage.
Ryuji: What about me?
Futaba: You're the Jester, Skull. Done deal.
Ryuji: The Jest- Wait, why!?
Haru: Does that mean my job would be the Company Manager?
Ann: ...I don't think that's what they're talking about.
—Persona 5 Strikers
Advertisement:

In RPGs a Character Class is a designation that determines a player's abilities and fighting style (and depending on the game possibly even their origin, education, and home area) often in the form of a job or archetype. A character class is defined by the abilities that it lends to a character — as such, two different characters with the same class are theoretically interchangeable, in that they have the same "power set" and can play the same role in gameplay because of their similar abilities. However, character class systems can come with varying levels of customization — ranging from characters of a given class being literally identical to having so much variety that character class is no longer even a good indicator of that character's abilities. While most common in fantasy Role-Playing Games, they have recently began to appear in other genres, such as trading card games and MOBAs.

The Fighter, Mage, Thief trio covers the three most basic character class archetypes which serve as categories that most other classes are based on. This page aims to list some of the more common character combat classes in games - both electronic and pen and paper.

See also Common Character Classes, An Adventurer Is You, Job System, Square Race, Round Class, and Modern Day & Sci-Fi RPG Class Equivalents. When the character classes reflect specific social categories within the game world (say, the fire mages, weather mages, and mind mages each study at different colleges and wear distinctive costumes, but also function as character classes for game purposes), the trope overlaps with Grouped for Your Convenience.

Advertisement:
open/close all folders
Fighters
The Fighter Classes: Other Names: Warrior, Knight, Soldier. One of the most basic classes, the Fighter puts emphasis on strength and physical combat. Wielding melee weapons, they typically lack range, or have only limited ranged attack options, but they excel at fighting enemies in close range combat, often having high HP, defense, and attack capabilities to aid in this. In a team or party based game they put themselves at risk at the front of the group and take the brunt of the damage meant for their less sturdy comrades. A Fighter's strength is boosted by the wide variety of equipment they can use and they are usually able to equip the widest variety of weaponry and armor, including stuff too heavy for other classes. Most of the time the Fighter is considered the default "hero" class and as such they are often considered good for beginners. Some variations on the Fighter class include:
Magicians
The Magician Classes: Other Names: Mage, Wizard, Sorcerer, Witch, Warlock, Magi, Magus, Sage. By whatever name you know this class by, you know this class: they primarily use magic powers. In any game with classes, there will always be one that maps to the Magician. These have the widest variety of any set of role-playing classes simply because there are so many varieties of Functional Magic. In a Fantasy Kitchen Sink setting, there can potentially be an infinite number of magic users, so long as there is justification for considering them each their own type. A Magician is usually a Glass Cannon, blasting away at long range, but easily taken down at close range. Variations include:
Rogues
The Rogue Classes: Other Names: Thief, Assassin, Ninja. Rogues are a diverse class that contains everything from dexterous thieves, to treasure-hunters, to assassins. Masters of stealth and infiltration, Rogues prefer to attack when their opponent is least aware. They are quick but fragile, unable to take heavy damage, and instead rely on their speed to dodge attacks and slip in and out of the shadows to catch their opponent off guard; setting traps and inflicting status effects on foes to give them the edge. Outside of battle Rogues usually have a wide range of helpful utility abilities such as lockpicking to allow them to open locked doors and treasure chests without needing to find/buy keys or the ability to detect and disarm traps. Some can even steal items directly from enemies allowing the player to obtain items that otherwise might be unobtainable. Sometimes Rogues are lumped in with the Ranger class, but more commonly they are differentiated by specializing in melee - particularly with light blades and daggers or ranged attacks using throwing weapons such as knives and shuriken. Variations include:
Clerics
The Cleric Classes: Other Names: Priest, Acolyte. A Cleric is usually The Medic — some variation on dedicated healers. Unlike Magician-classes, the Clerics usually draw their powers from either Faith, a god, or some variation of the two. Their magic generally requires them to stick to a certain doctrine to access it, but usually comes with less of a price or chance of backfiring like some Magician classes might experience. Clerics often focus on healing and party buffs, but sometimes they are offensively useful against "unholy" enemies such as demons and undead. Often draw their powers from Crystal Dragon Jesus and may be suspiciously Catholic for a fantasy setting. Cleric-type classes generally have the least amount of variation, simply because healing is so vital and important that distracting a healer generally isn't seen as a good idea. Variations include:
Rangers
The Ranger Classes: Other Names: Hunter, Archer. Rangers are woodsmen skilled at surviving in the wild. They may be lumped in with Fighters or Rogues (above) but more often than not are a separate tree of classes all their own. Archery is generally their favored skill, although melee combat also has a focus either primarily (In which case they will probably also have a lot of ranged abilities) or as a backup for when enemies get close. Rangers may also be skilled in some form of wilderness or nature magic, and sometimes capable of utilizing their terrain or surroundings to their advantage. They may be very good at fighting a specific type of enemy, and often take on the role of a Hunter of Monsters against such foes. In a setting that allows guns, they will usually appear in the hands of the Ranger.
Rarer Class Archetypes