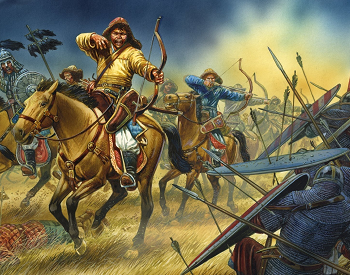 Wil: So, the archers of Sacae, they're all mounted, aren't they? I'd have trouble just staying on... If I had to shoot, too, I'd be in trouble!
Rath: ...The beasts of Sacae are swift... If we could not shoot from the saddle, we would starve...
— Fire Emblem: The Blazing Blade
Advertisement:

Someone who shoots a bow while on horseback.

Truth in Television for numerous civilizations, of course, with many historical armies being made up partly or primarily of horse archers. Prior to the invention of the stirrup, lance warfare demanded a great deal more skill as it required both hands holding the weapon. The Huns and Mongols are the best-known of these, and have spawned any number of clones in fantasy literature, but almost every civilization that had horses has used these at some point, often to devastating effectiveness, and the Samurai used the dai-kyu (a type of recurved longbow) from horseback up until the Meiji Restoration.

There are basically two categories of this trope. The first category are the light horse archers, who act as skirmishers and rely on agility and speed. They often specialize in Hit-and-Run Tactics, especially with archers who can spur their horse, turn around and shoot backwards as their enemies pursue.note This tactic in particular is often called the "Parthian shot," named after one of Ancient Rome's rivals who specialized in exactly this. The Parthians were often fought, but never conquered (at least not by the Romans themselves). Naturally, since it requires expert horsemanship, it is a specialty of any Born in the Saddle culture. An honorable mention goes to earlier civilizations (Persians, Egyptians, etc.) that used chariots as a shooting platform, but in those cases it was a team of both horses and men.

The second category are the heavy horse archers, who ride to the battle on close formations and shoot in volleys, intending to cause actual casualties instead of just harassing the enemy. They often support lancers and protect their flanks. The examples of the heavy horse archers are the Byzantine koursores and defensores, the Chinese cavalry, the Japanese samurai and the Ottoman Turkish sipahi. They are often willing and eager to engage in the hand-to-hand fighting as well. Even after firearms were introduced, they were somewhat difficult to use effectively from horseback, as a muzzle-loaded weapon requires stability, dexterity, and two hands to reload. The Renaissance pistoliers rather favoured to get close, fire both pistols, and then charge with sword. This meant that bow-wielding horsemen held on to an advantage as skirmishers, up until the invention of the revolver and breech-loaded long arms.

The MythBusters also proved that charging towards your target on a horse while firing can impart your arrows with ~70% more kinetic energy, and increase their penetration power a bit.

Mounted archery is Difficult, but Awesome, since it requires you to simultaneously control your horse without the reins, and take aim while compensating for the horse's movements. note You're not even allowed to participate in a Yabusame ceremony

until you've trained at least five years. The best archers have trained north of thirty years. To work properly, this trope requires also large, unobstructed areas of flat terrain where the mounted archers could employ their mobility unhindered. Any obstructions could easily lead into a disaster, especially against heavier opponents.

In Tabletop Games and Video Games, these are often Game-Breaker units, but not always. For balance reasons, they are often less powerful than archers who go on footnote Justifiably; horse archers do often seem to have had to use shorter, less powerful bows than footmen, making good foot archers an effective counter to horse archery. or are at least easily outnumbered by themnote Justifiable at a glance, since it is certain far more people in history at any given time were capable of competently using a bow than competently using a bow while riding a horse at the same time (though predicting a battle's winner solely from the numbers of troops involved would be oversimplifying), and if Annoying Arrows are in place already, this can lead to them being unable to effectively damage the enemy. Given that they often trade armor for speed, they can also easily be portrayed as Fragile Speedsters. If they can attack with swords as well, it's a case of Bow and Sword, in Accord.

Likely to be used by Hordes from the East. Especially if they are Born in the Saddle. Does not refer to a horse who is an archer, though with centaurs, there's heavy overlap.