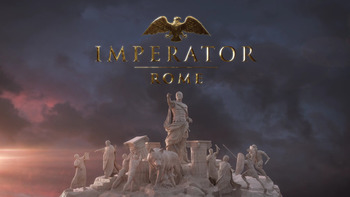 Can you build the greatest empire that the world has ever seen?
Advertisement:

Imperator: Rome is a historical real-time Grand Strategy game developed by Paradox Interactive, released on 25 April 2019. It is a spiritual successor of sorts to Europa Universalis: Rome, taking place after the collapse of Alexander the Great's empire and during the rise of The Roman Republic, using an advanced version of the Clausewitz engine used since Europa Universalis III.

Unlike its predecessor, Imperator fleshes out the non-Roman states that ruled Eurasia during this time period, with a concave map that stretches from Iberia to India. The game begins in 450 A.U.C (304 BCE), with the Roman Republic as merely one power among many note In fact, Rome had just concluded the Second Samnite War.

, and the player is challenged to either repeat Rome's ascendancy or guide another power to the greatness that Rome possessed in our timeline. The game itself combines mechanics from Europa Universalis, the Victoria series, and Crusader Kings, featuring population (pops) mechanics, with pops divided by culture, religion, and class, trade mechanics and trade goods, and fleshed out characters and character interaction, allowing for the simulation of both economic growth and political intrigue. The map is the largest yet for a Paradox game, containing over 9000 territories and numerous cultures, tribes, and states. The game launched with three political systems: Roman-style republics, authoritarian monarchies, and tribal clans. Probably unique to Imperator among PDS games, the smallest unit of land on the map is not a "province", but a territory (a rural settlement, city or metropolis); "provinces" here are groupings of territories.

The game was announced at ParadoxCon 2018 in a truly spectacular manner, with the founder of Paradox Interactive, Johan Andersson, himself donning a Roman toga and arriving with a procession of soldiers. The corresponding announcement trailer

an album of screenshots

was released at the same time.

Since release, free patches have hugely revamped many of the game's systems, in response to initially poor reviews and sales. Several DLCs have also been released. All are "content packs" adding flavor and missions to particular areas rather than adding new major features:

In May 2021, Paradox announced that there would be no new content for Imperator for the remainder of 2021, putting the future of the series in doubt.