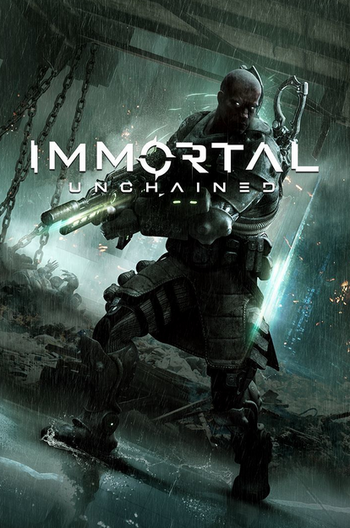 As long as the Universe was known to exist, a Monolith sat at its core. Debates raged between the scholars from all corners of the galaxy as to whether it was formed at the dawn of creation, or if it was the Monolith itself that gave rise to everything else, with the answer always proving elusive. In the meantime, the race known as the Prime learnt how to reverse-engineer a fraction of its secrets, and that was enough for them to form an empire greater than any the world has seen till then.

Good times didn't last, however, as a force known only as "the wind from Abyss" had suddenly appeared and raised the Prime's dead as deadly cybernetic warriors. They fought valiantly, but eventually all was lost, and the Monolith Keeper chose his absolute last gambit - an extremely dangerous Prisoner, condemned to indefinite cryosleep centuries ago, who has now become the few living's only hope of cleansing the nine worlds of the dead.

Immortal: Unchained is a Sci-Fi Hack and Slash / Third-Person Shooter hybrid game, developed by Toadman Interactive, and released on September 7th, 2018 for PC, Playstation 4 and Xbox One. Even before its release, the game has developed a reputation of "Dark Souls with guns", due to the obvious inspiration it's taken from that game.