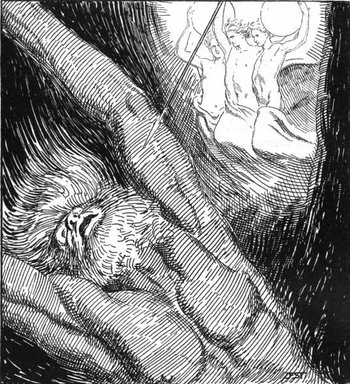 On one side we have Ymir, the first being. On the other side, we have the gods.
"You sing of the young gods easily
In the days when you are young;
But I go smelling yew and sods,
And I know there are gods behind the gods,
Gods that are best unsung."
— Ogier, The Ballad of the White Horse
Advertisement:

These Old Gods are often some type of Anthropomorphic Personification or Eldritch Abomination. In fact, they usually are in most mythologies. They also have a large overlap with Precursors, for gods at least. They occasionally appear as the demons of a replacement religion, but compare Angels, Devils and Squid for the cases when their Eldritch-ness is played up instead. See also Our Titans Are Different, as "Titan" is often a word used to describe such a being.