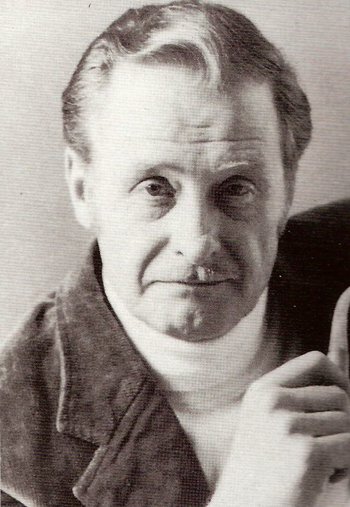 "Keep working. Keep trying. Keep believing. You still might not make it, but at least you gave it your best shot. If you don’t have calluses on your soul, this isn’t for you. Take up knitting instead."note Eddings advice to aspiring writers
Advertisement:

David Eddings was a modern American author who specialized in archetypical epic tales. All of his work was written jointly with his wife, Leigh Eddings, but she only started to receive co-author credit on works published from 1995 on.

Due to a stint in prison for child abuse that made his former career as a college professor untenable, the Eddings turned to fiction to make ends meet. After a series of flopped one-shot modern-day adventure novels published in the 1970s, Eddings was inspired by seeing a copy of The Lord of the Rings at the grocery store he worked to turn his attention to fantasy. Most of the books Eddings wrote (from the 1980s on) were High Fantasy Doorstoppers, and were part of a long series (some of which were in the same universe). They were also Strictly Formula, Troperiffic, and were decidedly Love-them-or-hate-them.note If you’re wondering how a pair of convicted child abusers became acclaimed and beloved fantasy authors, the Eddings child abuse convictions did not become widespread knowledge until 2020, due to only being reported on by local newspapers that were not archived online until years after they’d both died.

There was also snark. Lots and lots and lots of snark. Snark which was often used to hang lampshades.

Eddings saw history as cyclic, and so he was willing to recycle plot arcs in his series. The Malloreon has a similar structure to The Belgariad, for instance (which is even used as a major plot point).

Most, if not all, of his books were co-written with his wife, Leigh, though only the latest gave her shared credit (due to Executive Meddling - his publisher figured that boys wouldn't want to read a fantasy-book with a girl's name on the cover.) This is probably one of the main reasons for the abundancy of strong female characters, who are outspoken and fierce enough to make you wonder how those medieval societies manage to maintain their male-dominated status quo...

Leigh Eddings died in February 2007 and David Eddings in June of 2009.

Not to be confused with Claptrap's voice actor.

Works by David Eddings with their own pages include:

Other works by David Eddings contain examples of: