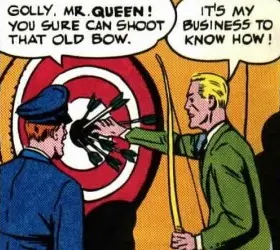 "But I wanted to play with the big boys. And if I miss, it means I'm just another dude with a bow. It means I've been fooling myself this whole time. And that's why I never miss."
— Hawkeye, Avenging Spider-Man
Advertisement:

The Master Archer is someone noted, either by the narrative or by other characters, for being an excellent shot with a bow and arrow, maybe to the point of being the best in the world. Maybe they hunt legendary beasts that can be felled only by the most skilled archers. Maybe they've proven their worth in competitions or on the battlefield, displaying Improbable Aiming Skills, executing Multishots or Splitting the Arrow with ease, or having their opponents Pinned to the Wall from a distance. Maybe they win with sneaky Trick Arrows. Or maybe they're a mysterious and anonymous figure who shoots their arrows from the shadows, and nobody knows where to find them. Either way, if they've got their arrows pointed at you, you better run — they can shoot you down from a distance, no matter how improbable it seems. This distinction immediately sets the character up as someone impressive or fearsome, especially if the bow and arrow is not a common weapon in the setting.

In mythical or fantasy settings, expect them to have a famous or even legendary bow and/or some association with divinity. Certain species like elves may also be associated with archery, and thus many Master Archers are of this species.

A Master Archer may or may not be an Archer Archetype — that trope is about how archers are usually portrayed as aloof and associated with nature, and has nothing to do with actual skill or reputation. Just as a good sniper can be friendly or cold, a Master Archer can run the gamut of temperaments so long as they are renowned for their skill.

The melee counterpart is the Master Swordsman. Compare The Gunslinger, a more modern gun-wielding equivalent who shares Improbable Aiming Skills. Someone using The Straight and Arrow Path, ie. archery in a setting with modern weapons, almost certainly needs to be a Master Archer to stay up to snuff. It's quite common for some wise guy to compare them to Robin Hood (though for them to really be Just Like Robin Hood, they'd also have to do the whole "rob the rich and give to the poor" bit).

No relation to the comedy show Archer.