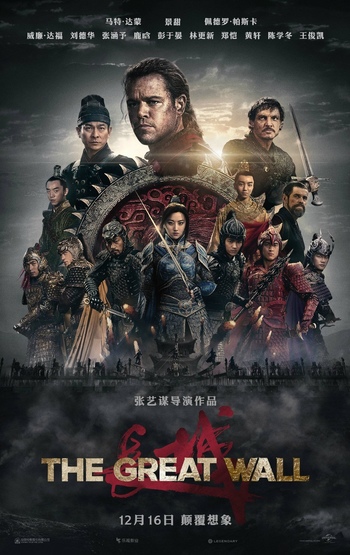 The Great Wall (長城, Cháng Chéng) is a 2016 epic Historical Fantasy action movie directed by Zhang Yimou featuring Matt Damon as William, Pedro Pascal as Tovar, Jing Tian as Commander Lin Mei, Andy Lau as Strategist Wang and Willem Dafoe as Sir Ballard. It was released in China in December 15th, 2016, and was released in the United States on February 17, 2017.

During the Song Dynasty (sometime in the 11th century), European mercenaries William, his friend Tovar and other sellswords are traveling to China in search of the Chinese's revolutionary secret weapon: black powder, a substance said to transform into fire with great force and able to kill ten men in one blast. On their way, their group is decimated by the hill tribes and then a mysterious beast which William and Tovar fortunately manage to slay. The two remaining mercenaries then stumble upon the Great Wall, a massive fortification running along the mountains and guarded by a huge army. Taken prisoner, William and Tovar meet the commanders guarding the wall, among them Lin Mei of the all-female Crane Troops, the only commander able to speak English, and learn that the beast they killed, a Tao Tei, is a mere scout for the great swarm of Tao Tei which scourge the North of China and threaten its capital. As the Great Wall is the capital's only meaningful defense, it is up to the commanders to repel the beasts. For his part, William begins to warm up to the army and cannot stay neutral as they fight, but Tovar is here to remind him that they came to seek black powder, which the army has aplenty.

The film is notable for being the first major movie made by Chinese companies in collaboration with American companies and personalities and deliberately aimed at an international market, thus why it features a Westerner as the protagonist and was shot in (mostly) English.

The Great Wall provides examples of: