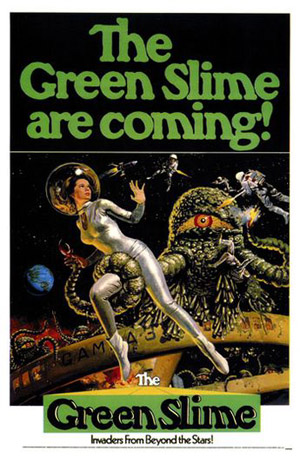 The Green Slime is a 1968 Science Fiction/Horror film, co-written by Batman creator Bill Finger, co-produced by Metro-Goldwyn-Mayer and Toei and directed by Kinji Fukasaku.

When a giant asteroid dubbed "Flora" threatens the Earth, a mission to destroy it is quickly launched, led by hard-ass commander Rankin (Robert Horton). The disaster is successfully averted; however, a small piece of space slime is unwittingly smuggled back to the space station Gamma 3, where it begins feeding off the station's power cables and grows into a tall green monster with deadly, electrified tentacles. Worse, the creature heals rapidly and regenerates any severed anatomy into a whole new creature... eventually building up a veritable army of nigh-unstoppable monsters. Now Rankin and the Gamma 3's crew must fight a seemingly hopeless battle as well as interpersonal tensions in an effort to keep the beasts from reaching Earth.

This film is notable for being the first movie ever riffed by Mystery Science Theater 3000, on the pilot episode for the original KTMA-era show. Sadly KTMA lost the rights to the film shortly after the episode was made, making it a Lost Episode (and, given Best Brains' attitude toward their KTMA-era work, it's likely to remain lost. Keep Circulating the Tapes!).