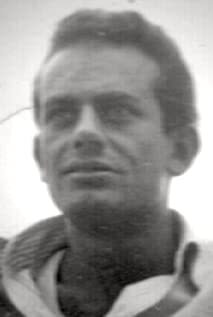 "Bill Finger was instrumental in developing many of the key creative elements that enrich the Batman universe, and we look forward to building on our acknowledgement of his significant role in DC Comics’ history,"
— Diane Nelson, President of DC Entertainment, 2015.
Advertisement:

Milton "Bill" Finger (February 8, 1914 – January 18, 1974) is the original writer of Batman, a character which, together with Bob Kane, he developed for the comic book Detective Comics #27, published by National Allied Publications, which would eventually become DC Comics. By personality, Finger was shy and retiring, and not very well equipped to deal with DC's management; due to this, Bob Kane became the dominant spokesman for Batman and ultimately negotiated a contract for the character with the stipulation that Batman always be undersigned as "Created by Bob Kane". While for most of his career he would downplay Finger's contributions, Kane later admitted in his final years that Finger was the co-creator of Batman and that he played an "unsung role" in his creation (while never fully owning up to the fact that he was the one who did the un-singing). DC Comics, while honoring the letter of Kane's byline, began to publicly acknowledge Finger as a co-creator of Batman and his Rogues Gallery.

The origins of Batman, as per recent research, began when Bob Kane came up with the initial name of the character and the first design, that of a brunette in red tights and a domino mask. In need of a writer, Kane came into contact with Finger who provided the lion's share of the more defining ideas. As per Jim Steranko and Ty Templeton, it was Finger who came up with the name of Gotham City, many of the defining ideas for the final design of Batman — chiefly The Cowl and the dark palette — and the name of Batman's alter-ego, Bruce Wayne, named after Revolutionary soldier "Mad" Anthony Wayne, note the same solider who inspired actor Marion Morrison to rename himself John Wayne which he felt provided Batman a Patrician heritage. Bob Kane also admitted that it was Finger who developed the idea of Batman as a "scientific detective".

Finger was The Movie Buff and based several aspects of Batman and his Rogues Gallery on films made in the 30s. As a writer, he wrote many key Batman stories, namely Detective Comics #33 — Batman's iconic Origins Episode, — whose details have remained virtually unchanged, despite myriad reboots and adaptations. Likewise, it was Finger who wrote "The Man Behind the Red Hood", the first Joker origin story which Alan Moore welded into The Killing Joke, as well as Robin Dies at Dawn which Grant Morrison reused for Canon Welding in their run on Batman. Finger also wrote many of the iconic first appearances of Two-Face, Scarecrow, The Riddler, Catwoman and Clayface note The original Basil Karlo edition. In addition to this, Finger also co-created Alan Scott, the first Green Lantern, Wildcat, and Lana Lang in Superboy. He also wrote two episodes of the 1960's Batman (1966) live-action TV series.

By the late 1960s, Finger's career had hit the skids and he struggled to find steady work. According to Charles Sinclair, his friend and occasional screenwriting collaborator, Finger spent much of this period as a consultant on government training and educational films which helped keep him relatively financially stable. In a dark irony, he died the same month a B-movie quickie he wrote was released in January 1974, The Bat People. He also wrote Track of the Moon Beast, which was released two years after his death, and The Green Slime (both co-written by Sinclair); the latter three films would get notoriety as Mystery Science Theater 3000 episodes.

Finger became more outspoken about his contributions to Batman in the 60s and 70s, but died before the beginning of the creator's rights movements of the 70s and 80s where Jerry Siegel and Joe Shuster, Jack Kirby and others would become a rallying point for comics fans and scholars. As such, it took many years for Finger's reputation as Batman's most vital creative voice would be widely accepted. The Bill Finger Award launched by Mark Evanier and Jerry Robinson (Joker's original artist) is named in his honour.

In 2012, Marc Tyler Nobleman and Ty Templeton created a graphic biography called "Bill the Boy Wonder" that revived interest in Bill Finger's name and reputation. In 2015

, Warner Bros. and DC announced that Finger would be credited as co-creator of Batman in future projects, starting from the second season of Gotham, Batman v Superman: Dawn of Justice and Batman: Return to Arkham. A 2017 documentary,

Batman & Bill, sheds more light on Finger's personal life and of Nobleman's efforts to get DC Comics to eventually acknowledge his contributions. In December 2017, Nobleman successfully campaigned to rename the intersection of East 192nd Street and Grand Concourse

as Bill Finger Way. The street overlooks Poe Park in the Bronx where Finger would meet with Kane to hash out ideas about Batman, and is considered the place where Batman was truly born.